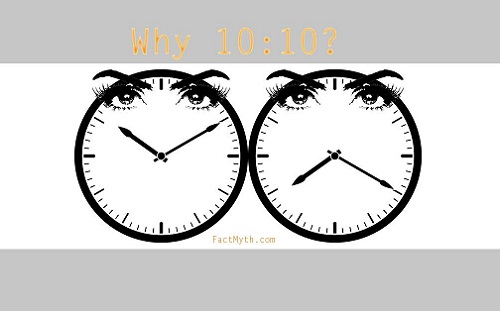 Let’s play a little game. Pick a magazine or newspaper. Access to the Net would also work for this game, if you do not have any magazine or newspaper lying around. Now look out for advertisement that features analogue watches or clocks. Or just Google “watches” or “clocks”. Pay close attention to the analogue timepieces. What exact time are the majority of the watches and clocks set to? What is the default time set on all the watches and clocks you see in these ads and images? Kindly put this paper down, go take a look at all the images and come back to this write up.

If you did this simple exercise, you will notice something quite amazing. Chances are that an overwhelming majority of these timepieces you looked at would be set to exactly ten minutes past ten. Yes, 10:10 to be exact! It might seem unbelievable but take a close look at all the watches and you will notice that many of them are set to 10:10. A few might display 1:50 but by and large the time on a a vast majority would be 10:10.

There are many myths surrounding why most analogue timepieces display the 10:10. It has been conjectured by many that 10:10 is the time some of the world greatest leaders were assassinated but this information has been debunked. In fact, the closest to this myth was President Abe Lincoln who was shot sometime around 10:15 but he stayed alive for a few hours before passing away the next morning at 7:22. Others have tried to link ten minutes past ten to other unfortunate events but all these are merely myths—with no grounding whatsoever in reality.

The real reason why the faces of many analogue watches and clocks display 10:10, I believe, has to do with where most brands place their logos. If you observe closely, you will realise that most brands place their logos right under the 12 mark or even sometimes the manufacturers replace the 12 mark with the brand logo. To ensure that the logo always attracts attention, the hour and minute hand must come as close as possible to the logo without covering it. Setting the hands at 10:10 gives the logo a sort of a frame while ensuring that it gets the much-needed attention.

It is very possible that the preceding paragraph bears the greatest semblance to anything like a truthful explanation of why many timepieces start off with the time set at 10:10. However, there is another reason given which excites me the more. It might just be coincidental but this reason resonates better with me.

It has been reported that this tradition of setting the time to 10:10 can be traced to the Timex Group, a watch-making company whose roots could be traced to as far back as 1854. Legend has it that originally, the default time for all Timex watches was 8:20. However, this was changed because 8:20 gave an impression of a frowning face.

One might wonder why a time-tested watch brand like Timex would even bother changing the default time of new pieces to 10:10. After all, everyone knows and can vouch for the quality of Timex watches. The answer is simple. A smile is powerful. A smile is a powerful weapon that can disarm even the fiercest opponent. The folks at Timex understood that regardless of what an individual is parting away with his or her hard-earned money for, the exchange must be done in the most cordial way possible. A smile creates just the right atmosphere to get the relationship on the right track.

Beyond just creating the conducive environment in which to do business, it has been revealed by scientists that our ability to smile has far-reaching consequences. In a TED Talk in 2011, American entrepreneur and speaker, Ron Gutman touched on a number of studies regarding smiles.

In a 30-year longitudinal study done by researchers from UC Berkeley using images of individuals found in old yearbooks, it came to light that the effects of smiles follows individuals later on in life. Researchers were able to predict how fulfilling and long-lasting an individual’s marriage was going to be and if the one would turn out well later on in life just based on whether they were smiling in the old photos. It has even been suggested that the span of an individual’s smile had a bearing on the individual’s life span. The wider the smile, the longer the person lived.

Smiling has such immense benefits that we cannot overemphasise its importance. In a June 2011 article I wrote for this column, I described a smile as the “universal language of customer service.” A smile has the same meaning everywhere in this world. As a matter of fact, researchers who encountered aboriginal tribes that had not had any contact with the Western found that even among these tribes, a smile had the same meaning as in the West—joy and satisfaction.

There is a practical application of the 10:10 concept that can work wonders for any organisation that dares to apply it. I prefer to call it a game. Call it an office tradition. Call it a rule. Call it whatever you so wish. This idea I am referring to is very simple but can have such a great impact on the atmosphere in the office. Sometimes, it takes something very small to start a revolution that would have a long-lasting impact.

This is how it is played. Simply set an alarm on the office clock to exactly 10:10. It helps if you have those wall clocks that come with alarms. If that is not available, any other timepiece would do. Inform all staff when they hear the alarm, they should pause whatever they are doing for a few seconds and smile. Yes, just that simple. Just smile when you hear the alarm. It helps if, at the initial stages, someone gets to monitor this “project”. After a few weeks, the one would not have to closely monitor if staff are smiling every morning at 10:10. If the organisation is one with employees that work at night, theirs would be ten past ten in the evening.

This might first start off as a crazy joke but it could turn out to be a great tradition. Individuals might even refuse to take part for fear of looking silly but what the 10:10 Game does is that it ensures that the office or workplace brightens up. No matter what an individual is going through, the one learns to step out of the situation and smile—knowing that everything would turn out just fine.

In fact, if some individuals in the office refuse to play along, leave them. The truth is that they would join in the smiling game pretty soon. Why? Because it has been found by researchers that a smile is so contagious that it is very difficult to look at someone with a genuine smile and not have one of your own. There is a reason why human beings were created in such a way that we do not have the ability to consciously control the muscles that create a genuine smile. This is why a fake smile can be detected a mile away because the one is able to control the muscles around the mouth but unable to do so to the muscles around the eyes which is where genuine smiles are created.

What the 10:10 Game also does is to cause an individual to apply a time-tested principle regarding emotions. It has been observed that one does not need to wait for the right emotions to undertake a certain cause of action. On the reverse, it is possible to generate the right emotions by taking the actions as if those emotions already exist. In other words, even if one is not in the mood to smile; by smiling, the one can get into the mood.

There is a powerful principle that underpins the 10:10 Game. It is the power of creating excellent habits. By “forcing” oneself when one hears the alarm go off at 10:10, the one trains the brain to create routines that become natural over time. Habits are formed over a loop that comprises of a cue, a routine and a reward. To create excellent service habits, one must ensure that there is first a cue. This is where the alarm at 10:10 comes in. The next step is the routine, which in the 10:10 Game, is the smile. The last thing is the reward. And as can be gleaned from all the above, the rewards are numerous—both for the individual and the organisation.

A word of caution, however. Only faulty timepieces display 10:10 throughout the day. It is therefore expected that front line employees would know when to smile and when to look serious. It all depends on the customer’s mood and emotions. When a customer is aggrieved for whatever reason, that cannot be the time to go 10:10. It might cause the customer to go 8:20 on you and that would not be very pleasant.

I simply cannot tell what time of the day you get to read this piece but I suggest you also play the 10:10 Game, even if it is only you. Set your alarm to 10:10 and just give a warm smile when the alarm goes off. It would be your personal little game you play. If you believe colleagues in the office would wonder if you had one glass too many the night before, then do not tell them. No one needs to know. Let it remain between you and your God. But by all means, smile when the clock strikes 10:10. The benefits are great. As a matter of fact, why even wait till it is 10:10. You can smile right now. It is free and it is always on time.

Repair works on FPSO Kwame Nkrumah to be completed in December...