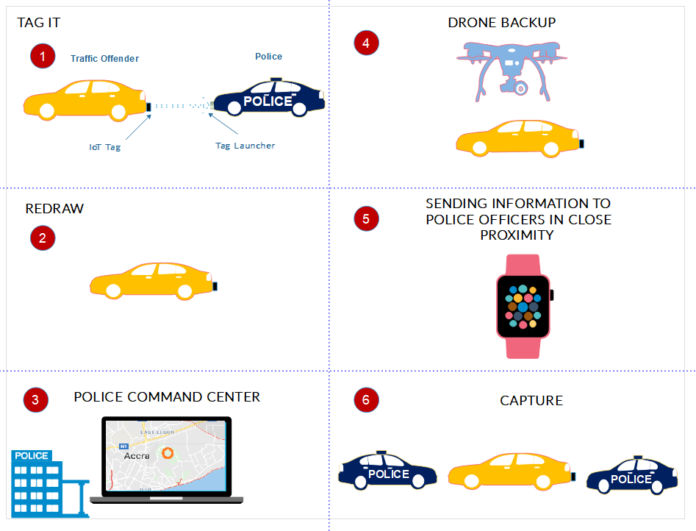 For instance, a report compiled by Nyabor on road accidents indicates that accidents alone cost Ghana in the excess of US$230million annually (2019). The causes of accidents have a lot of diverse reasons, ranging from bad road conditions to poorly-trained drivers. To combat these ills in our society, our policing officers need to be abreast with modern technologies.

In computing parlance, Internet of Things (IoT) is the concept that describes the idea of physical entities being connected to the Internet and being able to identify themselves to other devices (other sensor technologies, wireless technologies). When diverse objects [devices] act in accord, they are said to have ‘ambient intelligence’. Relying on these principles and other related technologies like geospatial dynamics, crimes can be easily be combatted (Rayes & Salam, 2019).

Why do we need IoT technology in Policing?

Many people think this is the heralding of an Orwellian police state as portrayed in the 1984 movie by Radford in (1984). Another group thinks the deployment of these technologies can hugely impact the way we combat crimes, or help to eliminate crimes entirely. Our today lifestyles have become digital, so crimes have also taken the digital dimension. Unfortunately, criminals in less developed countries are often ahead of the game, leveraging on the Internet.

After watching the Chappie crime sci-fi movie in 2015, when it was released (Blomkamp, 2015), it set me thinking of possible robotic policing in the future when such mechanised police forces will patrol the streets to combat crime. For the average person it is pure fiction, but I can tell you that this is a reality today!

Policing made easy through IoT

In certain jurisdictions, the cameras send tickets to the address of drivers who break certain stipulated speed limits. It is not a nice ticket to get in your mailbox, because it is laden with charges. This goes a long way to reduce incidents of the accident. However, in every society there are deviants – and hence the extra level of measures needed to be taken. The IoT technologies offer us a possibility to deal with these forms of excesses.

The deployment of these technologies means policing vehicles for crime-combat need to be designed to achieve this purpose, or these mechanisms must be added to the existing ones:  IoT-based systems which can do fingerprint checks, aerial surveillance, Iris scans, auto licence plate recognition, facial recognition systems in real-time relying on machine learning (ML) and artificial intelligence (AI) technologies.

I witnessed a scenario wherein the police used only a smartphone to track and apprehend a criminal. This knowledge is now also common to even ordinary people.  The 5G or millimetre-wave technologies combined with other IoT technologies offer us a lot of interesting solutions in the area of security. The diagram below shows how crime is combatted using this modern technology.

Crime tracking in our metropolis leveraging on IoT technologies

In a typical over-speeding scenario, when a driver tries to outrun the police pursuit vehicles, recording the name-plate is in many cases not useful in crime detection and prevention. In the above scenario, the reliance is on Global System for Mobile Communications (GSM)-based system, which use an adhesive base tag to track offenders.

This how the system works:

In most underdeveloped countries, the training offered to police recruits is too general. This training produces a ‘general’ outcome.  In many countries, there are various specialisations. For instance, in Germany I know there are different specialised police units: there is financial Police, whose duty is to check economic crimes.

The world has changed drastically, and therefore police training calls for specialisations too.  The police force therefore needs to be abreast with digital technologies. Digital technology will allow the police to practice BOLO effectively, which in the law enforcement code simply means ‘Be on the Lookout’. This preemptive approach to policing nips crime in the bud before it is committed. Understanding biometrics for data security and identification is also essential in modern-day policing and forensics.

There is so much to share, but I think our police need to be equipped with systems that make them accountable for their actions – like body-cams and GPS trackers – so that image of the police force is held in high esteem. Stealth digital lenses capable of recording and analysing everything on the street as it happens ahead and transmitting information is available for use. Why not have the Ghana police use these technologies? Business intellgence can be used in combatting crimes and their prevention as well.

There is so much to write, but due to lack of space and time let take a cue from the Bone Collector movie. Denzel Washington [Lincoln Rhyme] instructed Angelina Jolie [Amelia]: “Very slowly, walk the grid, one foot in front of the other. I want you to look around you now. Remember, crime scenes are three-dimensional; floors, walls, and ceilings” (Noyce, 1999).

I will also conclude that combatting crime in our modern pardigm is also three-dimensional; that is, reliance on proper IT technology, proper police training, and properly resourced individual police personnel.  Business Intelligent (BI) applications can help in crime forensics, but for the deviants in society let me end it here – because forensic tools are two edged-swords.

Rayes, A., & Salam, S. (2019). Internet of Things From Hype to Reality: The Road to Digitization. Switerland: Springer International Publishing.

Effects of COVID-19 on Corporate Ghana – The Insurance Industry