Today is International Women’s Day. All over Ghana, and globally, events, discussions and summits celebrate, challenge and engage the state of women in a variety of sectors.

This year’s International Women’s Day theme is: “Think equal, build smart, innovate for change under the umbrella, ‘Balance for Better’. It offers the world an opportunity to explore the multiple ways balance enriches and enhances a woman’s world and that of those she loves, leans on, lives with, works with and leads.

March is also the month Ghana celebrates her independence from British colonial masters.

For me this year, I connect the origins of International Women’s Day, to this year’s theme and our nation’s independence

I would like us to focus on balancing for the better the ways we tell our Independence history; the names that are lauded and those that are silenced or erased; and our opportunity to reimagine this telling, why this matters and what that reflects.

In today’s global honoring, Ghana – like many other parts of the world –  primarily celebrates women’s achievements. This love fest is a beautiful thing.

It is of course important that we celebrate women. Affirmation is an important element of both an Independence celebration and International Women’s Day.

And we can do that.

But, can we also connect dots in order to challenge a narrative that consistently sidelines – or worse erases – our contribution and turns the work of nation building into a labour conducted and achieved solely by presidents?

Scanning social media, I see the images of multiple presidents in honoring our Independence. Our first president, Kwame Nkrumah, might likely baulk at such an idea or notion. Indeed, during his presidency he recognized and honoured women and their crucial role in the independence movement by the numbers that worked within his party.

The more complex truth and a fuller telling of our history requires we centre, privilege and honor the stories, struggles, sacrifices and presence of thousands of women – names unknown, names erased, but whose contribution was crucial to the celebration a nation participates in every March.

As our flag flew high across the nation and across social media pages offering celebratory posts and Tweets as well as cautionary words, too many are unaware that its design – the horizontal bands of red, gold and green with the centered Black Star – is the vision and design of Theodosia Okoh, a Ghanaian woman, a teacher an artist and the first woman Chair of Ghana’s Hockey Association.  The gold signified our mineral wealth, the red was the blood shed that stained the soil in the fight for independence and the green was our lush vegetation and forests –  and the Black Star. That was our Emancipation, a pan-African symbol of unity, our power and our triumph.

International Women’s Day was originally about protest, and women fighting inequality within the world of labour. It can be traced back to New York City in February 1908. Thousands of women who were garment workers went on strike and marched through the city to protest against their working conditions.

This links women, inequality, protest, policy and leadership. How do we connect that to Ghana, our history, women and work?

One way is our 1992  Constitution and our 2019 current policy position on these two issues of women and inequality.

Our 1992 Constitution enshrines equality. The reality in contemporary, cultural and legal spaces is that equality is a promise unfulfilled.

What are the working conditions women in Ghana find themselves in and how are those shaped by policy?  How could they be changed by policy? What kind of protests are we creating, coordinating and carrying out in order for policy to better serve women?

With policy, we have a still unpassed and unimplemented Affirmative Action Bill. It is aimed at eradicating inequality; levelling a playing field and securing a stronger safety net for the 51% of women in Ghana. As it’s still unpassed, that means inequality maintains a power position in too many workplaces. This is despite protest, politicking and even our President’s apology in his first State of the Nation address that it had not yet been passed, but was a priority of his government.

And yes, we have the international bill of rights for women that is Convention on the Elimination of all Forms of Discrimination Against Women (CEDAW), but the Affirmative Action Bill seeks to increase representation and participation of women in governance, positions of power and decision-making.

Indeed, sixty-two years after Ghana gained Independence, the number of women in political corridors of government power is just 13.5%. Equally dramatic, the ascendance of rhetoric celebrating gender and the honoring of women – particularly in the start-up entrepreneurial spaces, but the absence of substantive legislative instruments to make this a reality, and a  consistently funded and prioritized reality.

Today in Ghana, the worlds of work and women and governance are still too dependent on the power of men. What kind of balance for the better would a passed and implemented Affirmative Action Bill create? What kind of leadership might it lead to if workplaces were free of the kinds of myriad issues that block and burden too many women? What kind of change would workplaces undergo if we had working, active sexual harassment policies?

Media has power here too.

Story-telling is a major part of what contemporary media does. It doesn’t just communicate information. It shapes narrative. That narrative has influence and impact. This is not simply about facts. It is about frames. The frame – or the lens – through which our Independence story is seen and told, matters. It shapes how we think about ourselves, it informs our approach to this ongoing work we call nation-building and who is named and known as participating in it.

When it comes to media – particularly television – there is a greater presence of women. However, it is morning radio where the power lies – and too few women contribute in those spaces. How can the workplaces of women in media be balanced so they can better serve the stories they are tasked to report? Or so they can better challenge narratives that replace their labour, reduce  their role or diminish their contributions?

Narrative shaping and changing is one. We could balance the story of this nation’s history for the better by honoring the roles, names, contributions of women. We would balance the narrative of mother of the nation by sharing the ways that women’s labour contributed to the movements that birthed Independence and beyond. That labour was crucial then. It is pivotal now. It should not be belittled or buried.

That labour is physical, financial, entrepreneurial, cultural and emotional. All governments require the push and pull of the combined pressures of activism, civil society organizations before they fully respond to calls catering to citizen’s needs and not increasing political power.

The story of our independence can be powerfully tied to international women’s history month and transformed into a national civic lesson designed for a nation to understand – in its fullest sense – the birth of this independent nation.

Right now, we too often have women on one part of the calendar and independence on another.  Unconnected, and yet in reality, so inter-connected.

Changing that is heavy lifting work. And it is always easier to sweeten rather than strengthen.

To ‘sweeten’ requires that we stroke the egos of our political leaders and hail what they have done for the women of Ghana. And indeed, there has been progress. That should not be overlooked.

To ‘strengthen’ calls for us to engage institutions and to critique, organize, strategize and smartly pressure government to better provide for its women citizens through policy, legislation, and full recognition of their particular needs.

It shouldn’t be a hard sell. But it is. That’s the challenge with what we call ‘culture’. Sometimes it is just sexism. Patriarchy too. Both global. Both beasts. Both dragons requiring slaying and dismantling. Neither is leaving our society or nation or community or family any time soon.

There are those who will dismiss such a coupling of history, our nation’s independence, international women’s day’s historical origins and gender as inappropriate. Understood. Their concern is noted. It does not diminish the importance of connecting these particular dots.

The naysayers are loud – wrong, but loud.

Their voices need not drown out those around whom our flag is also wrapped.

When we engage in the fullest telling of our nation’s independence and the expansive role of women – we balance, for better, our worlds and our independence narrative. When we are made safer, by the passage and implementation of legislation aimed at protecting and elevating us, we can all thrive.

When we all shine, we are unstoppable.  Happy International Women’s Day!

Esther A. Armah is one of the Speakers for an International Women’s Day event engaging, tackling and exploring issues of sexual and gender based violence in Ghana alongside Ghana’s 2nd Lady, H.E. Hajia Samira Bawumia, together with the foreign women ambassadors in Ghana. 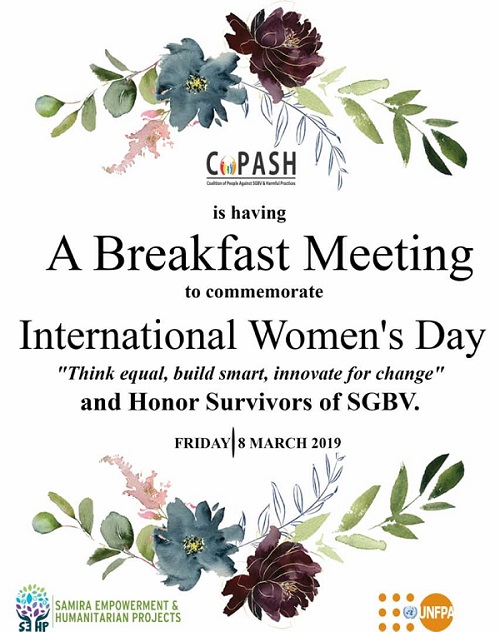