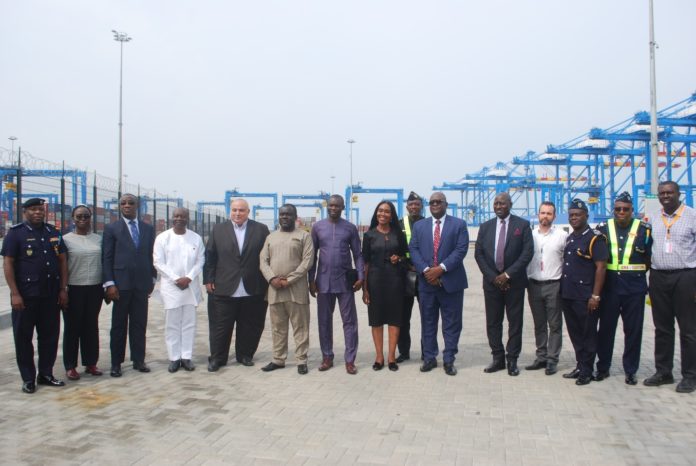 A high-powered government delegation has held business talks with the management of MPS. This follows the opening of Terminal 3 at Tema Port.

The discussions touched on safeguarding government revenue generation, border security, and how to effectively harness the investments in Terminal 3 for maximum economic gains from connecting Ghana’s Trade and Industry to Africa’s single market of 1.3 billion people with a combined GDP of US$3trillion.

Management of MPS, spearheaded by its CEO, Mr. Mohamed Samara, outlined the investments that had been made at Terminal 3 to enlarge cargo-handling capacity for ease of doing business and surge-cargo flow.

The new entrance channel and harbour basin is one of the deepest that we have in Africa with depth of 18 metres, allowing vessels with a 16-metre draft to dock.  With this terminal, the worlds’ biggest vessels will be able to enter; and as such, we are secure for the coming years. Should there be need to go deeper, the harbour basin is able to cater for that; the harbour basin, although built by MPS, belongs to the GPHA. It is built to accommodate up to 20 berths (depending on the vessels’ size) with MPS operating on 4 berths. There is therefore a lot of room to dredge deeper and build more wharves in the future.

The new Terminal 3 at Tema Port is expected to further improve the port’s productivity and capacity – and through that, Ghana’s liner shipping connectivity. Trade costs reduction will lead to an increase in trade volume and turnover for Ghana importers and exporters. This will in turn generate value to the economy, along with the creation of new jobs

Emphasising the creation of a Hub Port in Tema will steer Ghana’s Industry to be connected with Africa’s consumer markets in a more efficient way (direct services or shorter transit time and competitive sea freight rates). “This is an important facilitation to the economy; it thereby attracts investment in the trade & industry sectors to set up facilities/factories around Tema Port – leading to creation of jobs, increasing trade and foreign currency earnings etc.  The entire logistics chain will stand to benefit from such an increase in volume of trade & industry,” the discussion asserted.

Mr. Ofori-Atta recognised that the Terminal 3 presents a host of immense benefits and a key infrastructure toward successful implementation of the African Continental Free Trade Agreement (AfFCTA). “You came into this investment thinking Ghana or maybe West Africa; but as you know, last week Ghana was selected to host the AfFCTA headquarters. So indeed, partners, we have a task ahead to transform our 30 million people and US$50billion GDP into a potentially 1.3 billion people and US$3trillion GDP,” said the Honourable Minister of Finance.

The CEO of MPS responded positively and informed that the shareholders of MPS have approved to roll the construction directly into Phase-2 so as to have it completed by end of 2020, though it was initially planned to be delivered in the year 2022. It was noted that the increased port capacity will be enough to accommodate the growth of Ghana’s trade and industry for many years to come, as well as serving as a regional hub for West Africa and beyond.

Hon. Ofori-Atta indicated: “This is a new level of feasible economic gain if we do this work well. As you work on Phase-2, we must begin to see that this is bigger than we envisioned and will open us up to incredible potential for resources that we need to gear-up for”.

On the income front, the team from the GRA, after visiting the various scanner buildings, was confident that the new technology will help to eliminate existing leakages. This was after the delegation was taken through an excellent presentation by the Head of the Customs Unit at the Import Scanner Building, Madam Dorothy Arhin.

She explained extensively how the new scanning technology had transformed and added value to the role of Customs in port cargo handling. She described the new technology as a game-changer to the Customs processes for better transparency.

The Commissioner of Customs acknowledged there have been some issues with revenue leakages which should be immediately addressed to supplement domestic revenue.

“By the creation of this dedicated Container Terminal, the container traffic has been transferred here. This is therefore going to be a key aspect of revenue control, and we are looking to ensure that the leakages we experienced in GPHA will be completely eliminated,” said the Commissioner General of GRA.

The delegation was shown round the facilities, where they observed the movement of export cargo stage by stage from the Port’s In-Gate to the yard. Stops were also made at various points and the dedicated area for the Customs Intrusive Inspection – regarding which the Hon. Minister of Finance remarked: “This is very impressive. I don’t think I have seen anything like this and, again, with the emergence of the AfFCTA we have to relook at these plans for the future to ensure we capture this new reality that was not in our business plans”.

Commenting on the need for all associated infrastructure to be put in place, the Minister of Transport, Hon. Kwaku Ofori Asiamah, noted that all must be done to put the port to maximum use. “An infrastructure of this magnitude that has been developed must be well utilised. The aim is to make turnaround time easier and more efficient. This is a superb edifice that when combined with proper policies and programmes will benefit the nation,” he said.

The Ministers for Finance and Transport deliberated further with the Deputy Minister of Finance and the CEO of MPS on the key elements needed to turn such investment into an instrument that safeguards Customs revenue as in other parts of the world. Mr. Samara indicated that: “We have to work closely together to achieve that, and MPS has invested over US$24m in the Customs Inspection Infrastructure and Superstructure which facilitate the smooth movement of trade while providing a professional environment for the Inspection Officers to do their job”. The CEO of MPS further assured that the new set-up provides the Authorities with an audit trail of all receipt and delivery movements.

Also, the discussions implied that with the experience gathered from Terminal 3, same should be migrated to Terminal 1 & 2 to enable GPHA and Customs to manage all other general cargo that is not containerised with similar control measures.

In Terminal 3, MPS invested in the highest standard of technologies to improve border security while safeguarding state revenue to support the overall mandate of GRA and specifically enhance Customs’ tasks at the port. The portals are renowned for their ability to facilitate fast and effective security processing for a high volume of container traffic.

As an additional measure, all port drivers have been registered onto a biometric database to provide Biometric Access Control (BAC). Also installed are Weighbridges and four Smiths Detection HCVPZ60 scanning portals with one more expected to make a total of 5 scanners.

The Terminal has instituted a Truck Appointment System (TAS) that allows freight forwarders to pre-book appointments before accessing the port. These have been fully integrated with the Terminal operating System (TOS) to provide process-automation for drivers with pre-booked cargo tasks, so as to eliminate congestion and maximise efficiency levels without compromising on security at the port.

Let’s collaborate to bring development to the people — Otumfuo urges...