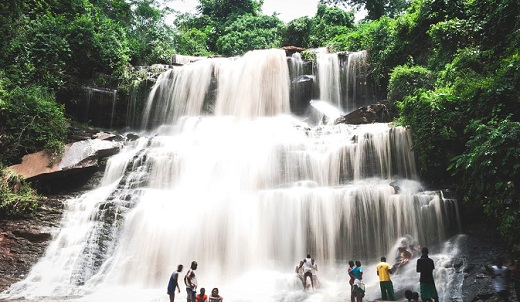 The construction of a suspended canopy walkway at the Kintampo Waterfalls in the Bono Region has significantly boosted tourist traffic at the site, following its inauguration earlier this year.

The Kintampo waterfalls canopy walkway was inaugurated by President Nana Addo Dankwa Akufo-Addo on Monday, April 13, 2019 during his visit to the newly-created region. Since then, the site has become one of the preferred destinations for both domestic and foreign tourists.

Statistics from managers of the Kintampo Waterfalls indicate that for the whole of 2018 the total number of visitations was 19,223; however, by half-year 2019, the site had recorded about 17,000 visitations. 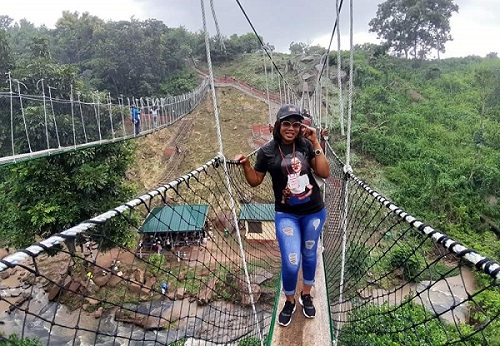 Patronage is expected to be higher in the last quarter of the year, which is believed to the peak season.

The canopy walkway was constructed under a public-private partnership (PPP) initiative.  The parties involved are a wholly Ghanaian-owned firm – Bonsu Aboritum Kanopy Walkway Limited; the Ghana Tourism Authority (GTA); Kintampo Municipal Assembly; and the Traditional Authorities. The two-line suspended 80 by 90 metres facility is about 100 metres above the water level. It has really enhanced tourists’ experience.

The facelift at the waterfalls was one of the recommendations in a safety audit report that was occasioned by a fatal heavy rainstorm at the site. The incident happened on Sunday, March 19, 2017, and claimed 18 lives. The victims were students of the Wenchi Methodist Senior High School and the University of Energy and Natural Resources (UENR) in Sunyani.

In an interview with B&FT, Bismark Baiden, Site Manager at the Kintampo Waterfalls said: “There are people who had visited this place before but were reluctant to come back just to bathe or for sight-seeing. But the canopy walkway added a new adventure to the site, thus increasing patronage since its inauguration in April this year. Patrons include first-timers and people who have past experience here”.

Besides the canopy walkway, the GTA and its partners have also started construction of a zip-line over the valley of the waterfalls. When completed, it will make the site one of the most attractive ecotourism sites in country. “Erection of the pillars is ongoing, and hopefully by November it should be ready for tourists’ to experience. It will make this place a lovely destination for all,” the Site Manager disclosed.

After the infamous 2017 disaster, safety and security have been a great issue of concern to the public. To this end, Mr. Baiden said life and site guards have been stationed at the base of the waterfalls to coach swimmers about the dos and don’ts. An infirmary has also been constructed to provide first-aid when the need be.

“We have beefed-up security at the site; right from the entrance, the personnel conduct a thorough search of visitors’ bags for offensive items like arms and sharp objects,” he added.

See Also:  EOCO warns public against Loom ...says it is a scam

The site’s refurbishment has added facilities like pavilions and summer-huts, mechanised bore-hole water, washrooms, a cafeteria, museum, rehabilitated staircases; and mini-shops that trade in provisions and traditional artifacts among others. The lawn zone is specious enough for alfresco events; there is also a spacious car park.

According to the Site Manager, plans are underway to construct a hotel and restaurant for better relaxation at the Kintampo Waterfalls. “We also want to make this place a research centre; we have so many ornamental plants around which students can use for tree identification. So far, we have planted an additional 6,400 tree species for that purpose as well as to create a serene environment,” he stated.

The Kintampo Waterfalls is one of the highest in the country; it falls about 70 metres down onto a beautiful rocky base.  It is located just at the shoulder of the Kumasi-Tamale highway, on outskirts of Kintampo town on the river ‘Pumpum’ a tributary of the Black Volta.   It takes its source from a village called Pumpumatifi, which is about 100 metres away from the waterfalls.

Tools of the Trade …putting Generation Y to good use