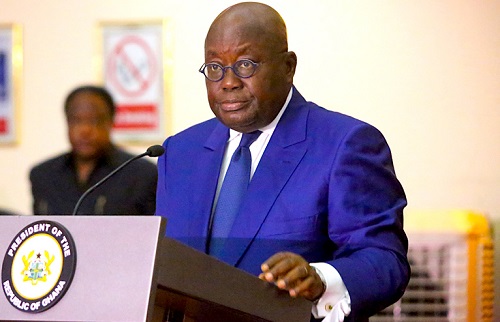 “The temptation in an election year is to turn on the tap…The work we have done will take us through, without having to do that,” President Akufo-Addo has reportedly said.

Comments like the above, have been said over and over again by past presidents of this country ahead of every general election. Unfortunately, after an election showdown, such comments turn out to only be fantasies that were being entertained, as successive governments try to spend big to keep their promises so as to be retained in power.

In the 2016 polls, the election which saw incumbent President John Dramani Mahama trumped by his opposite number Akufo-Addo, the fiscal deficit was targeted at 5.3 but widened to 9.3 percent at the end of the year. The previous election (2012) was even worse as the deficit ballooned to 12.5 percent against a target of 6.7 percent.

Another election showdown is staring at the country next year and the major concern now is whether the Akufo-Addo-led government will follow what has become a popular tradition for decades or he will try to stick to his words and keep spending in check in order to maintain fiscal stability.

In fact, the Trades Union Congress (TUC) has advised government to make sure its expenditure does not follow the business-as-usual pattern to ensure the country does not go back to swallow the bitter pill from the IMF bailout.

“As we enter another election year there is the temptation to spend on vote-winning projects that neither improves livelihoods of the people nor enhances the potential for future growth thereby totally destroying whatever gains we have made in previous years and set ourselves up for another painful and unnecessary IMF policies that destroy livelihoods and lower standards of living.

The TUC will hold government to its own promise that it will not repeat this mistake. The 2020 Budget Statement should signal a complete departure from this negative trend,” a TUC statement read.

With Finance Minister Ken Ofori-Atta presenting the budget today, all eyes and ears will be on government’s expenditure for next year. This is of particular interest to all stakeholders considering the consistent shortfall of domestic revenue which raises the question as to how government will finance its ambitious promises.

Remember that government initiatives such as the Free SHS, One District One Dam, One Constituency US$1 million, and numerous promised infrastructure projects all would require huge financial resources to undertake. But with total revenue hitting 15 percent below target for the first half of the 2019, there is a little hope that the revenue situation will improve, thereby, becoming a cause for worry as the only other way to finance these expenditure rest solely on borrowing – a situation that will certainly throw fiscal target off balance.

Even though in December 2018, government introduced the Fiscal Responsibility Law which limits future budget deficits to a maximum of 5 percent of GDP, some policy think-tanks have begun to cast doubts over government’s commitment to the law; and to live within its means this year and achieve its fiscal deficit target of 4.5 percent.

Databank Research for example, says it expects the fiscal weaknesses to persist as the government confronts payment obligations due contractors, energy sector companies and mounting debt service cost due to higher interest rates along with sharp Cedi depreciation. Hence, it predicts fiscal deficit to end 2019 with 4.6 ± 0.5 percent.

The Economist Intelligence Unit (EIU) also has projected the budget deficit to widen from 3.4 percent of GDP in 2018 to 5.5 percent by 2020 as a result of rising expenditure.

Today’s budget must, therefore, touch on government’s plan and strategy to boost domestic revenue to finance all its obligation and ambitious projects without derailing the fiscal target which has been a norm when the country goes to the polls.

Addressing the challenge of youth employment in Africa through YIELD