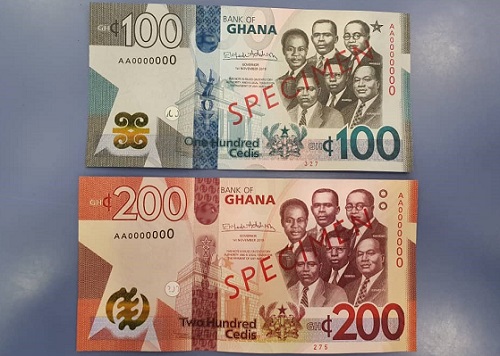 The central bank has introduced new higher denomination notes in addition to a GH¢2 coin in a bid to make cash transactions more convenient, as the new notes come with modern enhanced security features that will make them more durable.

The new notes, which come in GH¢100 and GH¢200 denominations according to the Bank of Ghana, were necessary as the structure of banknotes’ denomination has changed – resulting in a shift in demand for higher denominations. Currently, GH¢50 and GH¢20 account for about 70 percent of the total demand; hence, introduction of the notes to reduce the costs of printing and other currency management processes.

Speaking at the launch of the new notes, Governor of the Bank of Ghana, Dr. Ernest Addison, said it doesn’t mean the bank is no longer committed to promoting a cashless economy; rather, the informal structure of the economy makes cash still a preferred means of transacting business.

“The introduction of these high value notes should not be misinterpreted to mean a shift away from the Central Banks policy of pursuing a cashless society and promoting the use of electronic modes of payments. While vigorously pursuing financial inclusion by accelerating the migration to e-payment platforms, we are also mindful of the relevance of cash in our day-to-day dealings.

See Also:  Ecobank to hire 3,000 participants of digital jobs for the youth

“Undeniably, cash remains the preferred medium of payment by the large informal sector in the country. This is why we continue to pay attention to enhancements in the structure, security features and management of cash within the economy. This will stay with us for some time,” Dr. Addison said at the launch on Monday.

Commenting on the new higher denomination notes’ effect on the economy, Director of the Institute of Social, Statistical and Economic Research (ISSER) at the University of Ghana, Prof. Peter Quartey, debunked speculations that it will result in a rise of inflation. He rather argues that the only way such a situation would happen is when there is too much circulation of the notes without any increase in productive activity.

“There are some speculations that it causes inflation. If you look at the causes of inflation, large denominated currency notes do not necessarily cause inflation. Inflation simply means more money chasing few goods. So if we pump more money into the system without increasing production or economic activity, then that is when inflation comes in. But if you introduce new notes or higher denominated currency, and your production base is still solid, then that one is not inflationary.

The Bank of Ghana says it will embark on intensive public education to make the notes’ features familiar to the general public.