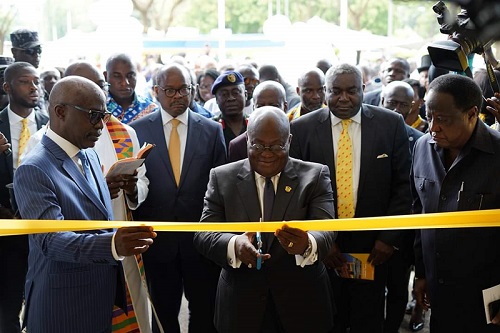 President Nana Addo Dankwa Akufo-Addo has urged banks to not only pursue profits but also see themselves as critical players in government’s agenda to develop the economy and lift Ghanaians’ standard of living.

“If we are to put this country onto a path of progress and prosperity, and thereby guarantee our future, the private sector and citizens of this country will have to be its main driving forces. The role of banks to this end is critical.

“When banks do not function as mere profit making enterprises but see themselves as active partners of government in building a healthy, productive and robust economy, then we will be making significant progress,” he said at the official opening of CalBank’s ultra-modern 12-storey head office in Accra.

To achieve the vision of building a healthy, productive and robust economy, the president stressed, his government embarked on ambitious reforms in the banking sector; and reports from the central bank point to the fact that those reforms are yielding positive returns.

“It is the very reason my government placed a lot of emphasis on reforming the banking sector, taking measures we deemed necessary to safeguard the stability and prospects of the economy. Those measures saved not only the deposits of 1.5 million Ghanaians and their businesses and the people they employed, but also minimised job losses in the banking sector.

“At the end of the first quarter of 2019, the banking industry performance in total assets, deposits, and net loans and advances all saw positive growth. Government will continue to work and build a durable financial sector, with Ghanaian banks hopefully leading the charge,” he noted.

He lauded the bank’s leadership for building a strong and solid bank that has gone through several transformations to attain its current status.

“The bank has been an integral part of Ghana’s economic story over the last three decades, and it has proven itself to be a solid bank with the added attraction of being a wholly Ghanaian-owned bank. It is always a joy when a good story is told, and it is even better when it is a successful Ghanaian story. I am certain that the best years of CalBank and indeed of mother Ghana herself lie ahead.

“Government will continue to encourage our domestic champions to grow and take significant positions in key sectors of the economy. A careful glance at the success of CalBank fortifies my belief that with hard work, ingenuity, innovation and creativity, we can indeed realise the vision of Ghana Beyond Aid,” he added.

Governor of the central bank, Dr. Ernest Addison, in his address noted that the banking system is becoming stronger by the day, as the core financial soundness indicators suggest that the sector’s soundness and stability has improved significantly even in the first quarter of 2019. This, he said, is a reflection of gains from the comprehensive set of reforms introduced by the Bank of Ghana.

“Liquidity levels in universal banks as at the end of December 2018 through to the first quarter of 2019 were among the highest recorded over the past 12 years. This can be attributed to the increase in cash balances in the banks. One can conclude that overall resilience of the banking industry has improved significantly,” he said.

He lauded CalBank for its overall contribution to the banking industry in Ghana, noting that: “One is not in doubt that it remains one of the flagship domestically-controlled banks with strong performance in asset performance and sustainability. Starting off as a merchant bank in 1990 and transitioning to a universal bank in 2004, CalBank has exhibited strong growth over the years with an increasing number of branches and several ATMS across the country”.

Frank Adu, Managing Director of the Cal Bank, noted that in the bank’s 29 years it has strategically built the necessary foundations to ensure a viable and profitable bank. 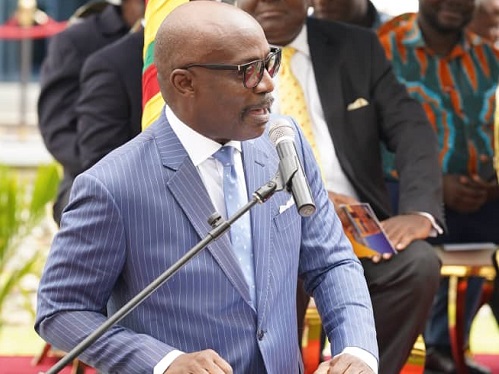 “The opening of the iconic and eco-friendly head office is testament to President Akufo-Addo’s vision that a Ghanaian indigenous bank with the right team and strategy can ride and survive the challenges of growth and competition, while delivering value on a continuing basis to all stakeholders. CalBank has done that and is on the journey to building greatness,” he said.

Delving into details of the head office building, Mr. Adu explained that the Nsaa (an Adinkra symbol connoting excellence) is the main inspiration for the building. With 12 floors, it has a total floor space of 15,200sqm and is 52.6m high.

As an eco-friendly building consisting of the main office tower and a six-storey multi-purpose car park as well as surface parking, the entire car park can accommodate over 550 cars. The building’s primary source of power is solar, with an installed capacity of 500kw complemented by the national grid; and a 1.6MW industrial power generator system.

The water system used in the building is from harvested rainwater and underground water. The building is fitted with a gym and a running track approximately 180 metres long for the use of staff, and a canteen. In addition, the building has a 400-seat amphitheatre and the most modern building management system.

Seventy years of UN Human Rights Declaration …… What next?