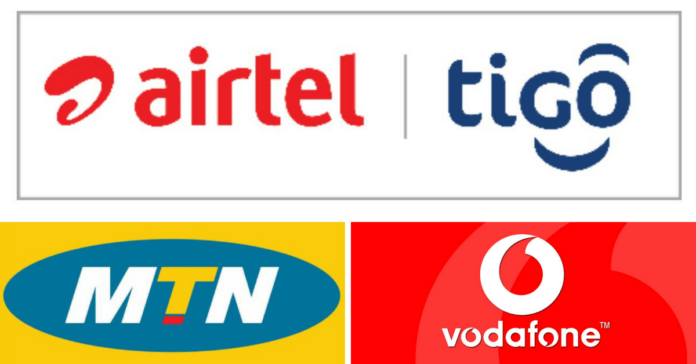 A report published by the Bank of Ghana shows that three telecom companies – MTN, AirtelTigo and Vodafone – raked in more than GH¢2billion from charges on mobile money services in 2018.

The Payment Systems Oversight Annual Report for 2018 indicated that the value of mobile money transactions for the period hit GH¢223.21billion.

It must be noted that telcos are allowed to charge at least 1 percent on monies sent through the mobile money platform. Given this, it can be rightly concluded that the three telcos made, at least, GH¢2.23billion (1 percent on GH¢223.21billion) on monies transferred through the payment platform.

The figure could even be more, as charges increase when money is transferred across different networks thanks to the interoperability system.

Telcos are tipped to make more revenue from the mobile money platform this year, as the statistics are estimated to get better this year considering historical data from the payment platform.

Based on the BoG report, the value of mobile money transactions has increased significantly over the past four years.

In 2015, the total value of transactions on the mobile money platform was GH¢35.4billion; meaning that with the current figure of GH¢223.21billion, the value of transactions has increased by more than 530 percent in just four years. And narrowing the scope to compare 2017 and 2018, the value increased by 43.2percent. No other payment system in the country comes close to the success being seen by mobile money platform.

These growth figures only affirm that the mobile money platform is the next big thing that will drive the financial inclusion agenda, which seeks to move from the 2017 level of 58 percent to 75 percent in 2023.

The fourth Economic Update Report on Ghana published by the World Bank supports this view, as it also said financial inclusion in the country is and will be largely driven by mobile money platforms rather than banks.

According to the report, of the 17 percentage points increase in access to formal financial services between 2010 and 2015, mobile money alone accounted for 7 percent while banks contributed only 2 percent. Again, mobile money and other non-bank financial institutions contributed an additional 8 percent.

This essentially means that within the five-year period, a lot more people are using mobile money platforms and other non-bank financial institutions to access financial services – such as paying bills, sending and receiving money, among others – rather than the traditional method of using banks.

What has accounted for this change in paradigm, the report says, is the rapid penetration of mobile phones in the country. This has made Ghana the fastest-growing mobile money market in Africa.