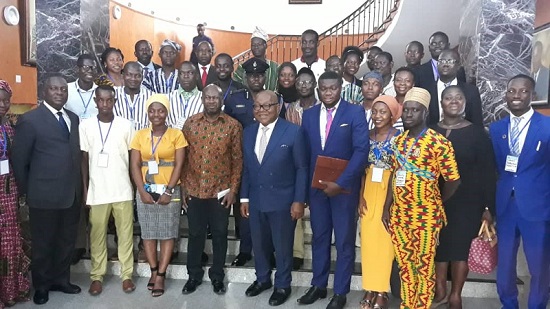 The Speaker of Parliament, Prof.Mike Oquaye, has expressed concern about the posture of businesses in the informal sector which fail to pay taxes; maintaining that they are making life difficult for successive governments.

Statistics from the GRA indicate that only 1.5 million of the expected six million taxpayers honour their tax responsibilities to the state, with 200,000 being from the informal sector.

Addressing members of a model parliament called Youth Parliamentarians from the Northern Region, who paid a courtesy call on him at parliament house on Thursday, the speaker justified the need to widen the tax scope and urged the informal sector businesses to pay taxes.

“When you talk about expenditure, then you also talk about taxation – and not just increasing taxes, but widening the tax scope so that we can get more people to pay taxes.

“As we sit in this country, one of our difficulties is that too few people are paying all the taxes that owe the country. Those in the informal sector think they are getting away with not paying taxes, but they are rather making life difficult for successive governments in providing social services. It does not help anybody in the long run. You want something to be done, and so you must also want to contribute to the ways and means of arriving at that particular goal,” he said.

The Customs Division of the Ghana Revenue Authority has said – as part of efforts to meet its target of GH¢17 billion for this year after losing 18% of its 2018 target – it will start prosecuting tax evaders.

The Chief Executive Officer of Star Ghana Foundation, Ibrahim Tanko Amidu who sponsored the visit, urged the legislature to enact relevant laws for the development of young people as future leaders of the country.

He assured of Star Ghana’s commitment toward the empowerment of young people across the country.

On his part, the leader of Youth Parliamentarians – Jeremiah Kasalku Takal, petitioned Parliament to support youth inclusivity in governance processes at all levels to advance policy formulation and implementation for national development.

They also appealed to Parliament’s select committees on Local Government and Rural Development, and Youth, Sports and Culture to support the setting-up and mentoring of Youth Parliaments across the country.

Additionally, they urged Parliament to fast-track the passage of the Affirmative Action and Right to Information bills as soon as possible.

See Also:  Mampong School for the Deaf gets pipe-borne water

The group constitutes a total of 175 Youth Parliamentarians from 25 communities in five districts of the Northern Region of Ghana: namely Sagnarigu, Yendi, Saboba, Nanumba South and Nanumba North and other youth advocates.

The community-based Youth Parliament concept was started by the youth of Saboba and is currently being implemented as an extended project by the Youth Empowerment for Life (YEfL).

The initiative is to provide a platform for young people to have engagements with decentralised duty-bearers and find solutions to issues concerning community development.

The Youth Parliament receives technical and financial support from the Star Ghana Foundation in its activities.