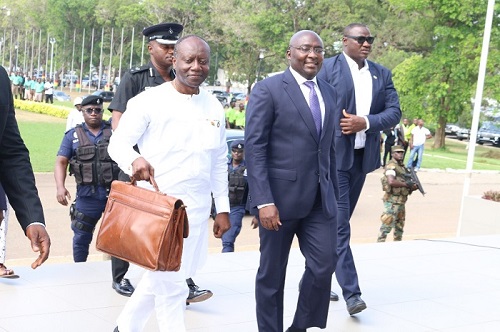 The government wants to raise GH¢67.1 billion, representing 16.9 percent of GDP, in total revenue in the 2020 fiscal year, Finance Minister, Ken Ofori-Atta, told Parliament in Accra during the presentation of 2020 Budget Statement and Economic Policy titled, ‘Nkosuo and Nkabom Budget’.

Out of the total expected figure for next year, GH¢65.8 billion is to be raised from domestic revenue, representing an annual growth of 22.5 percent over the projected resources for 2019.

The government also expects an increase in grants disbursement from development partners to the tune of GH¢1.2 billion, translating into 0.3% of GDP.  This represents a nominal growth of 48.8 percent over the projected funds of GH¢833.2 million in 2019.

The projected revenue, however, falls short of government’s projected total expenditure, including clearance of arrears, by over 18 billion, for the 2020 fiscal year.

According to the Minister, the government expects to spend a total of GH¢85.9 billion – 21.6 percent of GDP in 2020. This represents a growth of 21.2 percent above the projected outturn for 2019.

Out of the projected expenditure for next year, wages and salaries are projected at GH¢22.9 billion, translating into 26.7 percent of the total expenditure, including arrears clearance.

To ensure judicious use of the expected resources, Mr. Ofori-Atta assured that the government will continue with the implementation of the Earmarked Funds Capping and Realignment Act to reduce budget rigidities and create fiscal space to fund growth-enhancing expenditures.

“Consequently, transfers to Statutory Funds as well as all other earmarked funds are estimated at GH¢15.6 billion (3.9% of GDP) in 2020, representing 19.6 percent growth over the projected outturn for 2019,” he added.

In 2020, the government also plans to spend GH¢9.3 billion as capital expenditure, which represents a 53.5 percent increase over the 2019 projected outturn.

An act of thievery clothed as strategy: the untutored lawyer

All I hear are complaints about Ghana but…