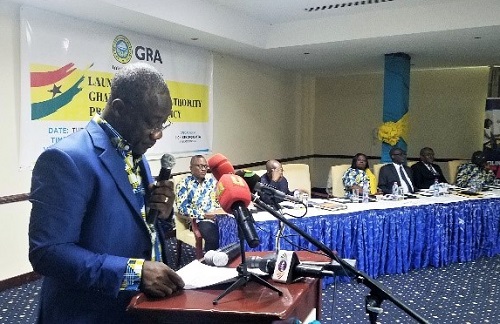 The Ghana Revenue Authority (GRA) has served a strong notice to take on existing and potential taxpayers who fail to honour their tax obligations with the launch of a ‘Prosecution Policy’ document, after employing a number of strategies to encourage voluntary tax compliance.

The new prosecution policy outlines the circumstances under which tax and Customs offenders may be prosecuted, while also standardising the processes and procedures for prosecution by the GRA.

According to the Commissioner General of GRA, Mr. Emmanuel Kofi Nti, the move forms part of measures to fulfil the Authority’s core mandate of mobilsing revenue for national development. The policy is intended to be used by all GRA officers who are expressly mandated to enforce the laws governing taxes and duties in the country.

Mr. Nti observed that all income earners, potential and existing taxpayers have the opportunity to amend their ways and become tax-compliant or be dealt with, with the coming into force of the policy.

The GRA over the past two years, he noted, has intensified its public education and sensitisation programmes nationwide to deepen awareness of various topical tax issues and the need to be tax compliant to avoid any infractions of the laws which may lead to prosecutions.

“We encourage the general public, especially income-earing persons, to be well-acquainted with their obligations under the tax laws; and the prosecution policy document to be well-guided to prevent any infractions.”

He stated that the GRA desires to see a more tax-compliant society, and isopen to assist the public to gain a better understanding of the tax laws.

The Commissioner General of GRA, who was speaking at the launching of the Prosecution Policy in Kumasi, said after a lot of persuasion through public education programmes on the importance of tax to the economy, the prosecution of selected cases will act as an effective deterrent to evasion, non-compliance, and tax and Customs fraud.

He however revealed that certain principles and factors underlie the prosecution policy. To decide whether prosecution action is the most appropriate remedy for dealing with compliance, the GRA will consider seven principles spelt out in the policy document.

For instance, it said: an offence may not proceed to prosecution where an administrative response is more appropriate; a prosecution case will not commence where there is insufficient evidence; and any prosecution action should have a deterrent effect on both the offender and the wider taxpaying community among others.

It must be noted that the law which establishes the Ghana Revenue Authority, the Authority Act, 2009 (Act 791), and others including the Income Tax Act, the Customs Act, and the Revenue Administration Act among others give powers to the Authority to ensure compliance with the tax laws.

Through these and laws other laws, GRA is mandated to enforce compliance to ensure that all persons earning income, and for that matter taxpayers, fully comply with their obligations and that revenue is correctly assessed and collected.

Mr. Kofi Nti emphasised that one important tool made available by the various laws to elicit compliance is the prosecution of tax offenders; however, he said the powers to prosecute must be guided by a documented policy made known to the public to ensure consistency in application. Hence the development of this policy.

The Finance Minister, Mr. Ken Ofori Atta, said to successfully achieve the purpose of this prosecution policy, the Legal Department should ensure that not only staff of the GRA are sensitised on the policy but the larger public too.

He noted that this will lead to helping obtain total adherence to the principles and procedures. “I believe that there is a significant number of people willing to be compliant if they know and understand the implications of non-compliance.” He thus urged GRA not to take lightly their own procedures.

The Ashanti Regional Minister, Mr. Simon Osei Mensah, also added that efficient implementation of the Policy, as a means to fight against tax and Customs fraud, will determine GRA’s ability to rake in the needed revenue from recalcitrant businesses and tax fraudsters for accelerated national development.