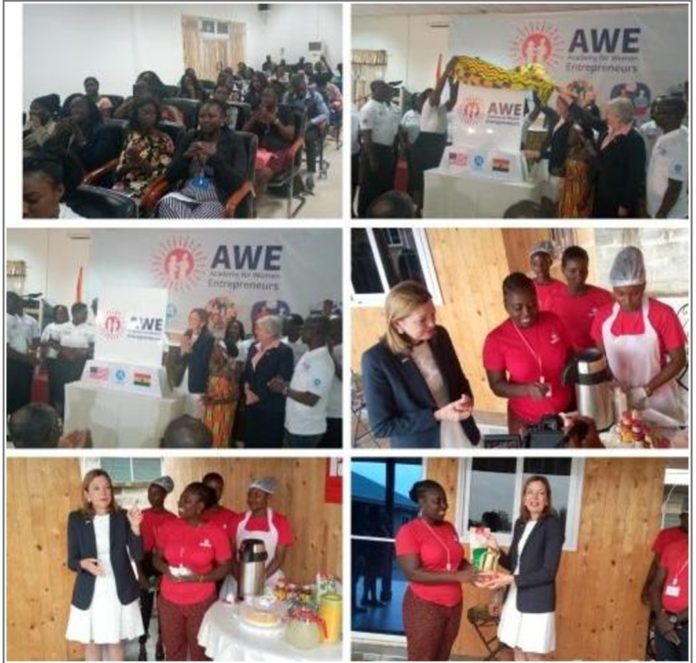 The United States (US) Embassy in collaboration with the Young African Leaders Initiative (YALI) on Tuesday launched the Academy for Women Entrepreneurs (AWE) in Accra to train and establish young women with entrepreneurial skills.

The Academy is committed to providing women with knowledge, tools and networks to turn their ideas into successful businesses.

The initiative is also designed to empower Ghanaian women entrepreneurs to fulfill their economic potential and create conditions for increased stability, security and prosperity for all.

Madam Marie Royce, the Assistant Secretary of State, US, who launched the Academy, said the Academy had a vision of training 50 million women around the world by 2029, especially in the developing countries.

She said women had been untapped resources in the developing world and left out of the global financial system.

She said the opening of the Academy was a pilot study in 26 countries worldwide, including 10 countries in Africa, and would be extended to other parts of the world if it succeeded.

Ghana, she said, was the second African country to have launched the Academy after Kenya.
The programme would be translated into Portuguese and French to reach a large group locally and globally, she said.

Madam Royce said the entrepreneurs would be trained on various programmes such as fostering network, and be mentored by successful women entrepreneurs.

She advised women entrepreneurs to develop love for their work in order not to be discouraged if they do not get the expected motivation from people.
“It is necessary to get a solid business plan and find the real needs of the people and bring out innovative products that are viable to them,” she said.

Ms Stephanie Sullivan, the US Ambassador to Ghana said the Academy was a new approach to enhance the training of women entrepreneurs as an engine of growth.

She believed the step would encourage entrepreneurship and develop the private sector base to promote social-economic development.
Dr Shola Safo-Duodu, the Project Lead of AWE Ghana, urged potential women entrepreneurs to apply online to be enrolled in the Academy.
She said the application process, which started on June 25 was expected to end on July 9, 2019.
She explained that after the process, the applications would be reviewed for the successful final 30 applicants to be selected and prepared for the training, which would span a period of 15 weeks.

The introductory session would be done on July 29 and the first session of training would be held on August 6, 2019, she explained.

Dr Safo-Duodu noted that after the end of the training session on November 12, 2019, trainees would be given some grants to establish, create or invest into their businesses.

Ms Georgina Koomson, an Entrepreneur and a beneficiary of the US Embassy’s mentorship programme, when visited at her company in Kpone, said she believed in producing healthy products for Ghanaians, hence, the motivation to be an entrepreneur.

She noted that one problem Ghana faced was the fact that entrepreneurs exported a lot of raw materials but lacked the confidence to produce them into finished goods.

She advised entrepreneurs and players in the Agricultural sector to add value to what they produce to yield the required benefits for the socio-economic development of the nation.

The Dubai Future Foundation: a symbol of foresight and thoughtful leadership

GMet to generate GH₵41m from services rendered to agencies