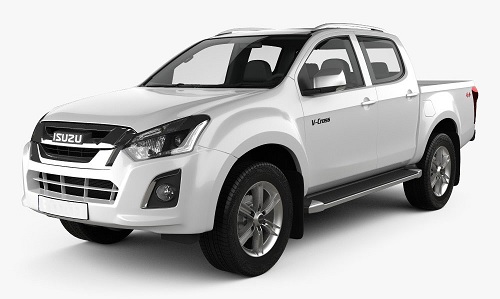 The ease of entry, exit and comfort ensures an enjoyable ride, even during long journeys. The all-new range has even eliminated most of the cabin noise and vibration. What you’re left with is a robust hauler that handles like a dream with an interior reminiscent of a luxury car.

A review by autoindustriya indicates that, the last time we tested the Isuzu D-Max, we billed it as a mixed-use workhorse. While the most comfortable, or refined choice among its peers, the D-Max endeared us with its rugged charm, as well as its capabilities.

It was fine as it was even as if it didn’t have the most powerful engine in its class but, regardless, Isuzu added a bit more zing to their pickup by giving it a new engine. Like the mu-X, the D-Max now benefits from the Bluepower turbodiesel fitted to the PPV. Does more power mean more pickup? A drive is in order.

Now, you will have a difficult time differentiating a 2018 D-Max from the 2017 model. In fact, there are practically no changes to the exterior. That’s not to say it’s an average looking truck. I say it looks purposefully handsome with its bold grill and chiseled bumper corners. Also carried over are the 18-inch alloy wheels which, in all fairness, suits this pickup rather well. Your only clues identifying this as a 2018 D-Max is the Bluepower badge and the 20th anniversary plaque on the tailgate. As they say, ‘if it ain’t broke, don’t fix it’.

Inside, it’s the same story as it too is exactly the same as last year’s model. It doesn’t get the same plusher treatment as found in the mu-X. There’s still acres of hard plastic but at least the silver trim brightens up the cabin a bit. There’s also the hard-wearing seats that feel like they can last at least a decade of abuse. For the 2018 model year, however, Isuzu has now added hill descent control which was previously unavailable.

What is new, however, is the infotainment system. It shares the same system as the mu-X although it loses out on some functions such as the internet browser capability. That said, it isn’t much of a loss given that the D-Max has a different purpose from the mu-X. Also, the screen is a bit easier to use with its large, clearly marked icons.

For space, there are no complaints although it could do with a higher reach bench. It does make up for it by offering a pair of secret compartments under the said seats. Simply flip the bench’s seat base to access them. Speaking of which, the 2018 D-Max sill comes with a host of storage bins scattered all over the cabin.

As mentioned, the revamped D-Max now uses the Bluepower turbodiesel as seen in the mu-X. From its 3.0-liter mill, it produces 177 PS and 380 Nm of torque, just like its five-door sibling. Unfortunately, it doesn’t get the new six-speed automatic meaning you only have five gears to play around with. This being the 4×4 model, it comes with an electronic dial to switch from two-wheel drive to four-wheel drive. Unlike some of its competitors, it does not come with a locking rear differential.

Out on the road, the new engine’s extra dose of power helps it reach cruising speeds with ease. It does, however, take its time before shifting due to the lack of a sixth year. With longer gearing, turbo lag in the D-Max is more noticeable than in the mu-X. But that said, this engine is a far more refined and relaxed unit.

With the torque figure retained from the older model, it doesn’t pin you back to your seat should you be enthusiastic with the accelerator. Instead, it picks up speed better and faster than the non-Bluepower units, making overtakes a little less stressful. Despite the extra power, there was no sacrifice in fuel economy. At an average speed of just 15 km/h, the D-Max still managed to return 8.2 kilometers per liter according to the pickup’s trip computer. It’s pretty believable given that it spent most of its time in traffic and it only consumed three to four bars of fuel over the course of 336 kilometers in the city.

The improvements to the engine also bring forth enhancements under the chassis. Having ridden last year’s D-Max, this new one rides a tad bit softer. Seated in front, the pickup feels floaty going past uneven roads and expansion joints. At the rear, it’s a little more forgiving than the old model. Mind you, it is still on the stiff side so do take on rough roads with a little more caution if you have people seated at the back.

Oddly enough, the steering on the D-max feels lighter than that of the mu-X. This makes this pickup surprisingly maneuverable around tight alleyways and car parks. Handling meanwhile is another story. With softer front dampers and leaf springs at the back, it drives exactly how one would expect a pickup to drive. Steering responses are slow and it takes its time to change direction but it’s not ponderous thanks to its lighter steering. Then again, this is a pickup, not a sports coupe. Fill up the bed, however, and the D-max feels unfazed by the added load, which is what you need and what is more important if you regularly haul cargo. 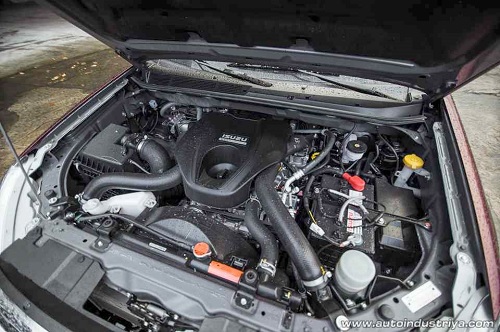 It’s now time to talk about price and it starts at Php 1,670,000, Php 100,000 more than last year. So why has the price gone up by that much? There’s that new engine with a helpful dose of extra power and, at the same time, it’s much cleaner than the engine it replaces. Cleaning up a diesel engine is not an inexpensive task. As for equipment, it’s on par with its contemporaries in their respective top of the line trim levels.

To sum up, the 2018 D-Max represents a half step from the old model. But that said, it still feels rugged, capable and can withstand years of abuse without breaking a sweat. So while the new D-Max is a minor evolution from the old truck, it is a step in the right direction. It still has all the right ingredients that have made Isuzu pickup trucks such a popular and solid choice in far-flung places.

MAC Ghana a 100% owned company of Mansour International FZCO is the exclusive distributor for Chevrolet & Isuzu range of products (Passenger cars, Pickups, Trucks, Buses) in Ghana since 2014. Mansour Automotive celebrated its 40th anniversary in 2016 and is one of the oldest automotive companies in Egypt formed by Mr. Mohammed Mansour in 1976 and are the exclusive distributors of Chevrolet, Opel, and Cadillac brands in Egypt. In this journey of last 40 years the group has expanded the operations in Iraq, Libya, Uganda & Ghana with a combined annual volume of over 75,000 vehicles across locations having an annual turnover of over $1.6 Billion.

MAC Ghana stared the operations in Accra, Ghana in August 2014 with our first 3S facility on the Spintex road in Accra with a current team of over sixty members.

Sofoline Interchange to be completed by six months

Scrapped taxes on spare parts to take effect in 2018

Living with an invisible illness – what we are missing (Part...

Debt albatross not easing off