It was also to enable the country take maximum advantage of market opportunities in the short-, medium- and long-terms.The Ghana Export Promotion Authority (GEPA) has held its second Export Development Strategy workshop, designed to enhance the country’s effective participation in the multilateral trading system.

Addressing participants at the opening of the two-day session held at Aqua Safari Resort in Ada, Ms. Afua Asabea Asare – the Chief Executive Officer of GEPA – said the forum was to consolidate government’s quest to have a nation ‘beyond aid’ and a vibrant economy with prosperity for all.

She said the Ministry of Trade and Industry has decided to implement programmes and initiatives that lead to development, diversification and promotion of the Ghanaian economy’s export base ensure sustainable growth, economic development, job-creation and prosperity for all.

Madam Afua added that government has coordinated programmes of economic and social development policies and economic transformation initiatives aimed at creating prosperity and equal opportunity for all in the trade sector.

Patrick Poku, representing the Minister of Trade and Industry, Alan Kyerematen said: “It is government’s aim to consolidate the past efforts at export diversification”.

He also stated that government, through the Minister of Trade and Industry, has decided to implement programmes and initiatives that lead to developing diversification and the promotion of an export base for the Ghanaian economy. Additionally, he added, government is poised to support the export sub-sector of the economy to become highly competitive, and seeks to make Ghana an export hub of the West Africa sub-region. 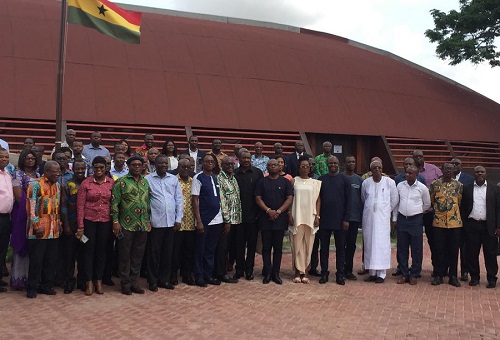 To this end, the Ghana 2018 trade data show that the country recorded a trade surplus of US$1.8billion; and this translated into 2.7 percent of the country’s GDP for 2018.

Again, the non-traditional export earnings of the country increased from US$2.46billion in 2016 to US$2.56billion in 2017, which represented an increase of 3.8 percent.

FBN Bank falls on parent bank to meet chunk of its...

Ghana@63: On leadership & entrepreneurship, we have a long way to...