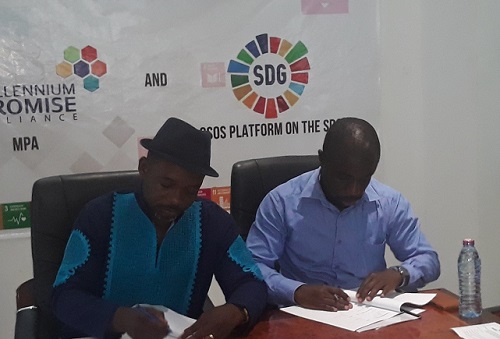 The Sekondi-Takoradi Chamber of Commerce and Industry (STCCI) has expressed its readiness to support the Western Regional Coordinating Council (WRCC) to promote private businesses that will grow the region’s economy.

“We support in the vision of the regional minister in making the region very enterprising that will attract investors , create employment opportunity for the people and make the region  the growth pole of the country.”, Ato Van-Ess, Chairman of STTCI has said.

He pointed out that the private sector which is the engine of growth should be supported fully by the public sector to execute their project efficiently.

Mr. Van-Ess said this when executives and members of STCCI paid a visit to the Western Regional Minister, Kwabena Okyere-Okyere Darko-Mensah to congratulate and welcome him at his office in Sekondi.

“This is a new Western Region; we are here to support him in his vision to grow the region. We have always been waiting for a young dynamic business man who will understand and support the private business to grow” he said.

He added that “we need the region to develop and we want to work through the WRCC to share ideas and come with programmes such as investment fair among others to bring the private sector and other stakeholders on board to develop the region”.

Mr. Kwabena Okyere Darko-Mensah, Western Regional Minister lauded the idea on investment fair raised by STCCI. However, he pointed that the private sector need to organize themselves very well in terms of conferences and programmes such as ‘ Investment Fair and the Ghana Economic Forum’ organized by the B&FT which is a good initiative.

“I do not believe in RCC or government organizing conferences, the private sector needs to be ready, so we can support and back them properly and send the right signals to the investor community; I believe if we organize it well a lot of government agencies will love to come and tell us what they have for the people in the region” he said.

He said under his administration, there is “entrepreneurial governance system, where we are bringing on board the private sector, traditional authourities, media and  make sure the  RCC and all stakeholders helps the private sector to succeed”.

“When it comes to our administration, I have told them we have to take a decision within five days on certain issues. I do not want excuses in doing things; we do not want bureaucracies to stifle the business of the business community” he added.

“We believe that investment have to lead the way in the Western Region but one of our critical issues that we have been preaching along is that when it comes to the western region, the westerners do not seem to have enough capital formation to do anything so, people bring in their money and send it back” he said.

He said “it is about time we start reengineering this financing so that the people here can invest and keep the profit here and I think one challenge that I will give you is to go and re-look at it”.

Mr. Darko –Mensah believes it is about time the western region becomes industrialize to be able to compete with other regions. Therefore, he called on westerners to invest and not to be employees “get involved and invest in the region and own the productive asset”.