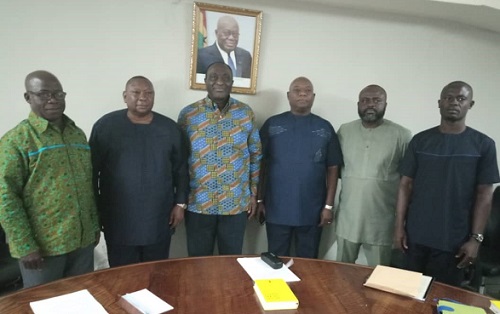 The Trade and Industry Minister, Alan Kyerematen, has urged the newly-constituted Board and Management of the Ghana National Procurement Company Limited (GNPCL) to revamp the company’s activities and properly position it as a force to be reckoned with within the framework of government’s industrial transformation agenda.

According to the Minister of Trade and Industry, though the company has had a chequered history, the advent of programmes like the One District, One Factory initiative is an opportunity to act as a commercial intermediary – by procuring and selling locally-produced raw materials for the numerous sprawling companies under the flagship programme.

This is especially so since most of the companies under the programme are agro-based, and will need a guaranteed source of raw materials – something he thinks the GNPCL should take advantage of.

The minister made these remarks on Monday when he inaugurated the 7-member Board of the Company under the chairmanship of a former Upper East Regional Minister, Alhassan Samari.  Samari is also a noted Tax Policy Planning and Administration Consultant.

Other members of the Board include: Chief Executive, Dr. Edward N.Y. Ofori-Kuragu (a tourism and hospitality expert with over 20 years’ experience); Charles Kweku Hammond (an Advertising and Marketing consultant); and Kwaku Nsiah Mensuoh (an I.T Consultant). The rest are Kofi Okyere-Agyekum (M.P); Dr. Joseph Kofi Nkuah (Tax Administrator); and Mr. Mohammed Abdul Hamid.

The minister also tasked the Board to strive to become an export hub by being the leading export company for Made-in-Ghana goods, since the Ghana Export Promotion Authority is not a commercial entity. He noted that in doing so, they should not lose sight of the vast domestic market that has developed a great taste for locally manufactured products.

The Board Chairman, Alhasan Samari, thanked the president and the minister for the confidence reposed in them and promised, on behalf of members, to do their best to turnaround the company’s fortunes.

The GNPCL was established in 1976 by SMCD 55 as a statutory body to help stabilise prices of essential commodities. It was later incorporated in 1995 as a limited liability company under the Company’s Code to import essential commodities for distribution and sale to consumers at affordable prices.