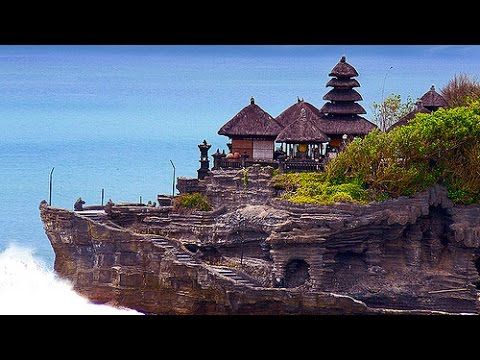 It was a bright Wednesday afternoon and people from all walks of life including domestic tourists have milled up at the Tanah Lot Temple to have a feel of this rock formation off the Indonesian island of Bali which is home to the ancient Hindu pilgrimage temple Pura Tanah Lot, a popular tourist and cultural icon for photography.

It is very interesting to see how tourists -old and young -to Indonesia spend time to visit   the various preserved hindu temples in that country despite their(hindu) near extinct in a country that is believed to be the most populous Muslim-majority nation in the world.

Indonesia is not a country known for Buddhism; Buddhists represent a tiny minority of the country’s population at 0.7 per cent, dwarfed by the 87.5 per cent Muslim majority but it is interesting how temples which date way back have been preserved and have become daily attraction for tourists who come to the country. Buddhism has a long history in Indonesia, and is recognized as one of the six official religions in Indonesia, along with Islam, Christianity (Protestantism and Catholicism), Hinduism and Confucianism.

Historians say the Tanah Lot is claimed to be the work of the 16th-century Dang Hyang Nirartha. During his travels along the south coast he saw the rock-island’s beautiful setting and decided to rest there. Some fishermen saw him, and bought him gifts. Nirartha then spent the night on the little island. Later he spoke to the fishermen and told them to build a shrine on the rock, for he felt it to be a holy place to worship the Balinese sea gods. The main deity of the temple is Dewa Baruna or Bhatara Segara, who is the sea god or sea power and these days, Nirartha is also worshipped here. 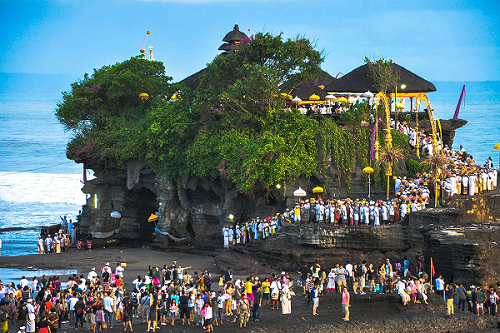 The Tanah Lot temple was built and has been a part of Balinese mythology for centuries. The temple is one of seven sea temples around the Balinese coast. Each of the sea temples was established within eyesight of the next to form a chain along the south-western coast. In addition to Balinese mythology, the temple was significantly influenced by Hinduism ,according to wikipedia

At the base of the rocky island, venomous sea snakes are believed to guard the temple from evil spirits and intruders. The temple is purportedly protected by a giant snake, which was created from Nirartha’s selendang (a type of sash) when he established the island. The temple sits on a rock 30 meters away from the waterfront. Here you can watch the sun rise over the Indian Ocean. Thousands of tourists come to Tanah Lot temple every year specifically for that.

Bali is famous. Its historic sites, exotic temples, charming nature, hospitality, ancient culture and glamorous beaches make it a must go area. Bali is also an island of dreams famous for relaxation, rich local music and dance, art and rituals.

For those fond of adventure, Bali offers rafting, surfing, parachuting and other entertainment. There are many restaurants, bars, spa centers and colorful nightclubs where seafood is predominant.

Another must-see place in Bali is Pura Luhur Uluwatu temple. Here you will get acquainted with the ancient history of Bali, learn about the local people’s beliefs and see a spectacular landscape of the Indian Ocean. Many monkeys live in and around the temple and one has to be careful with stuffs like sunglasses and hats among others.The visit ends with a vigorous one hour kecak dance performance.

A trip to Bali will give everyone pleasant impressions and unforgettable moments. The beautiful climate, the delicious food, people’s hospitality and mysterious places will stay in the heart of everyone traveling to Bali for a long time.

The most famous of these by far is the magnificent Borobudur outside Yogyakarta in Central Java and considered as the largest Buddhist temple in the world.

Borobudur temple is built to represent many layers of Buddhist theory. From the bird’s eye view, the temple is in the shape of a traditional Buddhist mandala.

A mandala is central to a great deal of Buddhist and Hindu art, the basic form of most Hindu and Buddhist mandalas is a square with four entry points and a circular center point. Working from the exterior, three zones of consciousness are represented, with the central sphere representing unconsciousness or Nirvana.

According to Buddhist cosmology, the universe is divided into three major zones. The Borobudur temple represents these zones in its rising layers: Kamadhatu, Rupadhatu and Arupadhatu.

The first section called “Kamadhatu” which describes the human lives which have able to control desires which is described by the foundation section.

The second section is called “Rupadhatu” which describes human lives have able to control desires yet still bound by forms.

The third section is “Arupadhatu” which describes nirvana and sunyata worlds, described by 3 terraces in form of circles.

Borough was left to ravages of nature in the 8th century when the power of java shifted to East of the island. The reason for this shift is unknown, but it is often speculated that there was a volcanic eruption and people moved to be away from it.

There are manuscripts that relate stories of Javanese re-visiting the site in the 18th century. But it was the re-discovery by the British Sir Stamford Raffles in 1814 that led to greater recognition of and also preservation efforts. In 1815 Raffles commissioned an initial clean up, where 200 labourers spent 45 days felling trees and moving earth from the remains. Many areas of the temple were sagging.

Activities continued with documentation and interpretation of the reliefs. It was during the work of Ijzerman in the 1885 that the hidden reliefs at the base of the temple were discovered. It was these hidden reliefs that also revealed some Sanskrit instructions left by the carver, with lettering that was so distinctive that the construction of the temple was able to be dated, to the middle of the 9th century, during the time of the Syailendra dynasty reign.

A few scenes had been left unfinished, with instructions to the stone carver inscribed in Sanskrit, and the style of lettering is so distinctive that it can be dated specifically to the middle of the 9th century.

In 1907, a large restoration was carried out under Dutchman Van Erp that finished in 1911. The work was significant and definitely safeguarded the temple for some time. However, many of the pieces were put back in their original positions during the restoration.