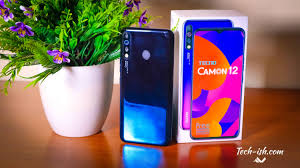 Mobile Technology giant, TECNO, has launched as part of its Camon series, the Camon 12 at the Kempinski Gold Coast Hotel in Accra.

The event was also aimed at engaging customers and clients of the TECNO brand as well as appreciate them for their loyalty to the company.

In his remarks, General Manager of Mobile zone, Mr. Daniel Glover, noted that TECNO
has come up with another wonderful competitive product called the TECNO Camon 12. He said the product is about to take the market by storm.

Mr. Glover added that TECNO, has over the years come up with very good quality products that the market has received with overwhelming support “such that there has not been a time where we launched the product to replace an existing product that the new product is not able to outdo what the previous one has done. Our new products always do well and are better than our own expectations.”

He expressed gratitude to all dealers and customers of the company their continuous patronage over the years.

He appealed to the audience present to continue to enjoy the same patronage and support that we have in the car for all the other devices in the future. “It is therefore my fervent hope that the TECNO C12 will be better than all the other devices that have been released. I am sure that some of those who have been trying to count the number of devices we have brought onto the market so far must have lost count because of the frequency.”

Also present was the Data & Devices Manager of MTN, Mr. Abdul Latif, who noted that the partnership between MTN and TECNO was started in 2011. He said, since the collaboration, MTN has increased the number of customers who use mobile data on the network from two million to over 40 million mobile data customers.

He revealed that the partnership between TECNO and MTN has aided MTN to moved away from the area where customers were required text to get a better offer to a more seamless operation.

“When we first launched the 4G network in 2016, TECNO was one of the early ones that responded to our call to create more 4G devices to this market. Today we are proud to say that there are 12 million customers on our network who are using 4G”, said Mr. —#

See Also:  With innovation at the centre, Ghana Beyond Aid is achievable – Prof Atuahene-Gima

He assured that MTN will continue to strengthen its collaboration with TECNO and congratulated TECNO for being a leading brands and pacesetter.

The Canon 12 has a face Unlock feature and a close eye detection screen. It is designed to make better photography for smartphones. The startup application could go up by 50% while those games lovers will experience it by an increase of 25%.

MTN to excite clients this February

Roots Hotel celebrates Kente with the ‘Back to Your Roots’ culture...

ADB to finance selected projects in the Ashanti Region