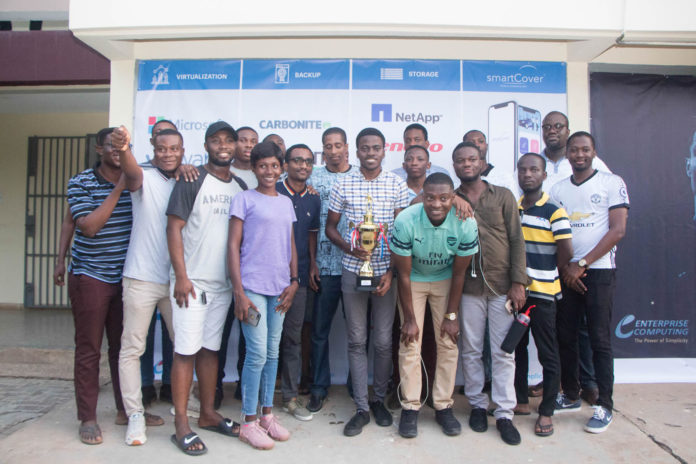 As part of efforts to deepen business relationship with its customers, Enterprise Computing has organized a corporate hangout, which brought together some key clients of the company to play indoor games.

The event, which was held at the premise of Enterprise Computing, on Saturday, December 14, 2019 saw representatives from leading banks participating in various activities.

It all started as a brag; who was the best in the industry when it came to FIFA 20 PS4 or Xbox games. A competition was set up to let everyone put their money where their mouth is. The gauntlet, the challenge was accepted, and ECL was to officiate the match.

“We wanted to create a platform for our customers to have fun and compete. It has all been serious work since the beginning of the year. But now, we think it is time to also socialize and build bonds while we prepare our minds for the task ahead of us next year,” the Head of Sales for Enterprise Computing, Michael Odame Tutu said.

The IT gentlemen, taking a break from the tough job, jogged onto the world class stadium of ECL office full of confidence and even more braggadocio; everyone claimed the trophy and the billy goat was theirs for the taking.

The first prize, a fully grown sokoto horned, no nonsense looking bearded billy goat, a second prize of two of the finest fowls capable of leaving a permanent imprint on the palate when prepared with soup to go with fufu and the third prize, an equally fine bird with a crate of eggs that would for once give Nigerian jollof a chance to compete with the undisputed Ghana jollof were all set for the game.

Two representatives each from the participating banks showed their skills on the consoles for the most coveted trophy.

Three of the banks backed out at the last minute with excuses of hamstring injury, dislocated ball and socket joint and other strange afflictions not yet known to the world of football however, our competition must go on.

After several elimination rounds, FNB and GT Bank met at the semifinals to compete for the bragging rights however, GT Bank were no match for the lads from FNB.

The finals, captured on the mega screens with 3D sound effect was a sight to behold. In the end, the boys from FNB sailed through as winners taking the first and second positions with GT Bank coming in third.

Speaking to the B&FT in an interview, some of the competitors from Cal Bank, Republic Bank and OmniBSIC indicated their eagerness for a rematch to reclaim the title.

According to them, the event was very necessary as it also offered an opportunity to learn from each other aside what they do at work.

Enterprise Computing is a technology-based organization with exceptional expertise in providing simplified solutions for all their valued customers.

Their strategies are aligned with the best OEMs to provide scalable, relevant, dynamic and enterprise-worthy IT solutions that work. At the core of their operations is the design and deployment of simplified solutions with very short learning curves that helps to empower the IT team to make their work more productive.

With I.T. running efficiently, uptimes are maximized leading to faster turn-around times for their clients while providing 24/7 fanatical support.