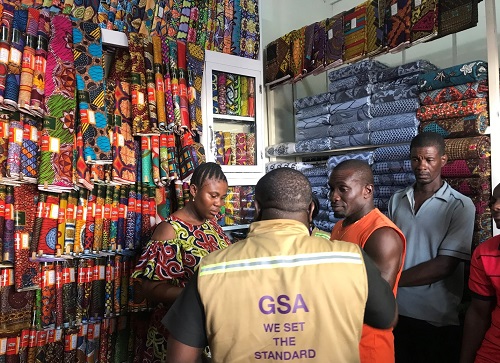 The Ghana Standards Authority has embarked on an exercise in the central business district of Accra to investigate the influx of substandard products, especially textiles, that in most cases pose health risks to consumers.

The exercise is aimed at ridding marketplaces of these products to save consumers’ lives, as well as maintain the country’s standards.

Speaking with the media during the exercise, Business Development Manager of GSA, George Kojo Anti, stressed the need to intensify its checks due to reports of some cancer-causing dyes some manufacturers use in production of the materials.

“As part of the routine enforcement work that we do, we also do some intelligence-gathering; and some weeks back we received a number of reports from consumers, mainly on textiles products, about the poor quality of products that we have in some of our markets.

“Indeed, when these reports come we do some background checks and investigations to confirm, at least to some degree of certainty, the veracity of the information we have received. We did do so in this particular case, and it did show that the reports we had received were largely credible – that we had some substandard products on the market, mainly imported products which had not come into the country through approved routes, and therefore we could not attest to the quality or otherwise of those products.

“It is an open secret that the high rate of skin cancer and diseases we are recording these days can be attributed to the dyes – some of which have even been banned but are still being used by manufacturers, usually outside the country, because people are looking to undercut the market and make huge profits at the risk of human lives,” he stated.

The exercise entailed collecting some samples of the fabrics from various shops and taking them to a laboratory to be tested for quality and safety in consumers’ use.

Mr. Anti emphasised the exercise does not aim at destroying businesses, as is being purported by the traders, but rather ensures that only products which meet the country’s standards are allowed on the markets.

He noted: “We are not here to destroy anybody’s business. Today’s exercise was to go to the market, sample products, and take them to the laboratory for testing.

“The GSA is supposed to check the importation of products into the country; check the standard and make sure they meet Ghana standards. Where they do not, we are mandated by law to prohibit their entry into the country – that is, if we notice them at the ports. We are also allowed by law to follow these products through to the markets and remove them from there, or stop them from being sold.”

The GSA officials deployed for the exercise locked up some of the shops in which they found more ‘suspicious’ fabrics. Some shop owners also rushed to lock up their outlets for fear of having their products sampled.

A trader of textile products, Afia Theresa, told the B&FT in an interview that most of the traders prefer dealing in the imported fabrics because the cost less, and consumers also prefer them because they are cheaper compared to the locally produced ones. On behalf of her colleagues, she urged local manufacturers to reduce prices on products to increase patronage.