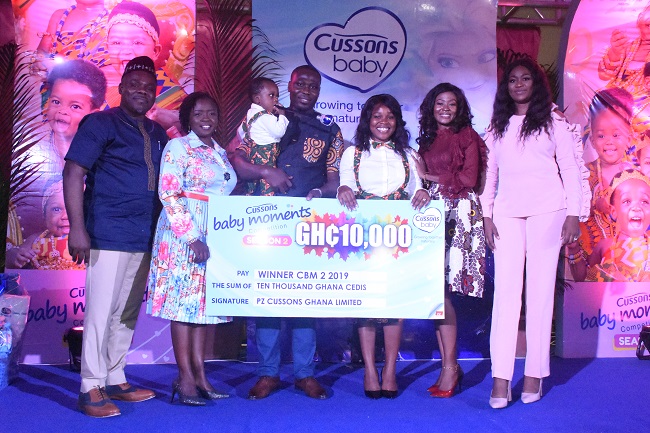 Baby Andre Osei Boateng walked away with a cash prize of GHC10,000 at the grand finale of the contest which was held at the Alisa Hotel, Ridge

He also received a plaque, a 6 months’ cover of PZ Cussons products as well as an extra GHC10,000 worth donation to a charity or a Children’s ward of their choice.

Present at the event was Madam Cynthia Morrison, Minister for Gender, Children and Social Protection who admonished PZ Cussons Ghana Ltd and the Cussons Baby Brand for such a novel initiative.

She said her ministry is particularly keen on parental involvement in raising not only the girl child but the male child as well. She praised fathers who participated in the event especially those who came twining with their babies for the grand finale.

In an interview with the Head of Marketing, Madam Hafsa Arthur, she noted that Cussons Baby Moments deepens brand affinity with families and further develops brand trial and advocacy.

She said “What we do is to bring everyone together and create a family bonding. It’s been phenomenal because we’ve had 700,000 engagements on social media within the last 16 weeks. The whole idea is also to give back through donations to a charity”.

“We will continue with the family bonding. We did a bit of cultural promotion where we had every baby dress in traditional wear because today, every baby shoot looks very foreign and they’re wrapped up in wool and stuff like that. So, this makes the difference by bringing it home and making it exciting and relatable” added Madam Hafsa Arthur.

She revealed that the Season two saw entries double from the previous season with over 1000 baby entries. 10 finalists were who were selected through a series of voting and judging, were given a free professional photoshoots.

Babies Nana Akua Sikapa Adu-Gyamfi and Svetlana Esmee Selinam Akomatsri were the 1st and 2nd Runner Ups respectively. Among other prizes, Nana Akua took home a cash prize of GHC4,000 while Svetlana took with her cash price of GHC2,000.

The event was fun-filled and graced by Nakeeyat and Nene from TV3’s Talented Kids Show.

Infinix opens an Experience Centre at the Achimota Mall