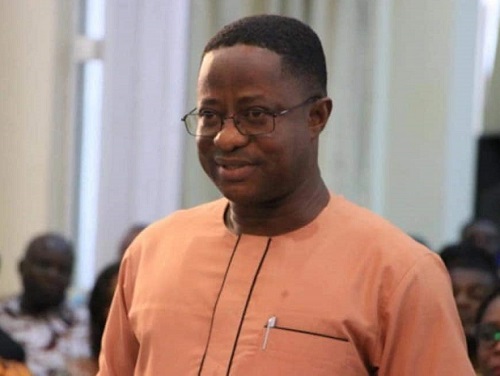 The Minister for Energy, Mr. John Peter Amewu says government will insist that the Power Distribution Service Ghana Limited (PDS) delivers in accordance with the Key Performance Indicators stipulated in the transaction agreement for the restructuring of the operations of the Electricity Company of Ghana (ECG).

A statement issued indicated that government is committed to ensuring that the energy sector was efficiently and effectively run in order to push forward the socio-economic agenda of the country.

It said ECG has over the years been faced with numerous challenges including electricity theft, overloading of equipment and lines due to capacity constraints, weak feeders and obsolete equipment.

These bottlenecks in the power sector, the statement said, have led to the need to introduce the private sector in the management and operations of ECG, adding that the transaction agreement has met the expectations of all parties involved.

The Ministry commended the hard work done by previous Energy Minister and successive government for their contributions towards the transfer process.

The Energy Ministry also commended the United States Government and the Millennium Development Authority for their contribution and support towards improvement in the electricity distribution sector.

The statement said the Government of Ghana on August 5, 2014 executed the 2nd Millennium Challenge Compact with the United States Government.

It said the Compact aims to increase private sector investment and the productivity and profitability of the micro, small, medium and the large-scale businesses.

The statement said among the six projects within the second Compact is the ECG Financial and Operational Turnaround Project (EFOT), which seeks to introduce a Private Sector Participant in the Management and Operations of the ECG.

Meralco-led Consortium, including A Energia SA, an Angolan Company, and three other Ghanaian Companies: TG Energy Solutions Ghana Limited, Santa Power Limited and GTS Power Limited which formed the PDS was eventually declared the winner after a competitive procurement process.

The Energy Minister, Mr John Peter Amewu has pledged his Ministry’s full support to the partnership and believed it would go a long way to reduce power theft, technical and commercial losses and make power consumption affordable to consumers towards achieving the industrial revolution agenda.

He indicated that government will keep an eagle eye on key performance indicators of the Electricity Company of Ghana (ECG) take-over by Power Distribution Services Ghana Limited (PDS).

Speaking at the official transfer of ECG’s Assets and Operations to PDS Ghana Limited, in Accra, Mr Amewu underscored the need for PDS to keep track of the key deliverables of the transaction and comply with them accordingly.

He warned that government would no longer entertain fraudulent power transactions, which could compel the country to pay penalties and, thus, cited previous experiences whereby the State had to spend between US$25 and US$30 million for “bad power deals”.

Mr. Ken Ofori-Atta, the Minister of Finance, said one of the major constraints to the country’s development was insufficient and unreliable power, hence the welcoming news by the Ghana Power Compact, through the benevolence of the United States government, acting through the Millennium Challenge Corporation.

In spite of the many power deals entered into by the government such as the Independent Power Producers, there was still challenges with the energy sector, posing high cost to power consumers.

He, therefore, said more than US$500 million Compact funds would go a long way to ensure efficiency in the power distribution sector, reduce operational cost and curtail technical and commercial power losses, which had characterised the operations of the ECG over the years.

Mr Ofori-Atta said the Government’s decision to champion the ECG Financial and Operational Turnaround (EFOT) Project through the Private Sector Participation (PSP) was considered consistent with the strategic direction of the Ghana Power Sector Reform programme, started in 1994.

The Minister said the EFOT would further enhance economic growth, reduce poverty and improve the reliability of the quality of power supply, which would benefit about six million Ghanaians.

He acknowledged the contribution of the Millennium Development Authority (MiDA) over the past four years, which had collaborated with the Ministry of Finance, Attorney-General’s Department, Energy Commission, Public Utilities Regulatory Commission, ECG and other key actors to design an acceptable PSP provider.

Hence, government’s desire to improve the quality of service, efficiency and financial viability of the ECG, support the achievement of middle income status, minimise the financial burden on the Government by mobilising private capital to achieve better power coverage in the near future and enhance the country’s economic competitiveness.

He expressed optimism that Meralco Consortium and its Ghanaian majority shareholders would effectively work together to form a south-south cooperation to bring on board professional practices so that ECG recovered it investment in due course.

He expressed the belief that the partnership would result in improvement in infrastructural development in the power sector and improve the quality of service delivery.

Mr Ofori-Atta assured of government’s commitment to championing the county’s growth pole to attain industrial revolution and serve as a major catalyst for success.

The Minister said Meralco had obtained relevant experiences over the years and made required investments in the power sector as well as equitable treatment of ECG staff.

He noted that the availability of power would support the country’s socio-economic transformation agenda towards achieving the “Ghana Beyond Aid”.

2021 PANAFEST to focus on health and wealth

National strategy to eliminate IUU in the works