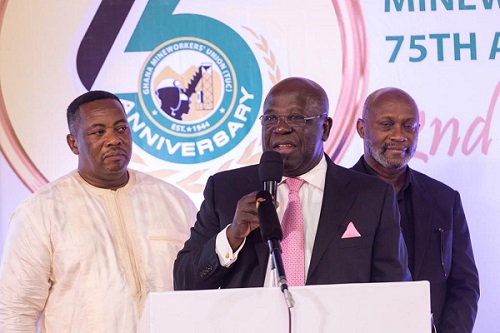 Sir Samuel Esson Jonah was last week honoured by the Ghana Mineworkers’ Union of the Trades Union Congress (TUC) in the platinum category of the Union’s 75th anniversary awards, and part of the citation read: “…the Union owes you a great deal of gratitude because you pioneered the introduction of a fair remuneration model in the mining sector which has made mineworkers of today the envy of workers from other sectors. You have indeed left a lasting legacy in the mining landscape of Ghana”.

Sam Jonah was also recognised, among others, for initiating and supervising the construction of workers’ accommodation for both junior and senior staff, thus meeting the housing needs of the average mineworker in the then-Ashanti Goldfields Corporation.

Part of Sam Poku’s citation read: “…Your tenure at the helm of the Chamber coincided with the period of our nation’s most tumultuous political history. You managed to create opportunity for the Chamber to work amicably with key regulatory authorities and the political leadership.

“Your effective leadership role created the foundation that helped build the Chamber’s reputation in advocating for policies that are beneficial to the economy in general and the mining sector in particular.”

Former Vice Chancellor of the University of Ghana, Professor Akilagpa Sawyerr, was another distinguished personality to be awarded at the awards/dinner ceremony at the Movenpick Hotel in Accra on November 28.

Part of Professor Sawyerr’s citation read: “As Chairman of the first Mineral Commission Board, you offered the needed leadership to advise government on all issues relating to exploration of the country’s mineral resources in the 1980s.

“Your exhibition or demonstration of high standards in public life and leadership is exemplary.”

The union also recognised Professor Sawyerr for “being the distinctive repository of knowledge and wisdom during preparation of the modern mining laws in Ghana, and your commitment to and strong advocacy for equitable gain for all stakeholders through a sound and safe mining regime in Ghana”.

Finally, the founding Chief Executive of the Minerals Commission of Ghana, Kofi Ansah, was also honoured by the GMWU.  He was recognised for his dynamic leadership skills in negotiations with investors on fiscal incentives and monitoring all mining activities, which led to rapid growth of the mining economy.

See Also:  Why the law should not permit foreign participation in Ghana’s Development Minerals Sector

General Secretary of GMWU, Prince William Ankrah, said in his opening remarks that this year is exactly 75 years since the union was established. And to commemorate the its Diamond Anniversary, the Union therefore thought it wise to recognize and honour distinguished statesmen and industry giants whose inestimable contributions have left a lasting legacy in the mining landscape.

The Chief Director-Ministry of Lands and Natural Resources, Professor Patrick Agbensiyale, commended the union’s Management Committee for deeming it appropriate to recognise doyens of the industry. He said government has also taken note of the entrepreneurial initiatives being undertaken by the union, and urged them to operate within the confines of relevant legal frameworks.

PMMC valued about US$12bn worth of gold in two years

A woman’s role transcends being a mother—First Lady