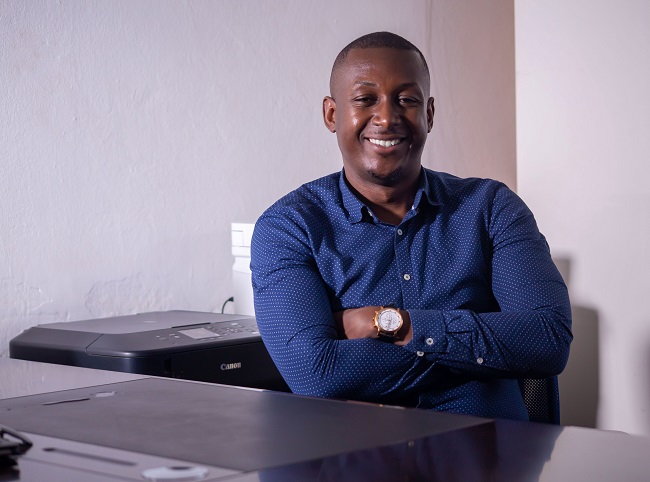 There are different applications doing a whole lot of things, but there is an app from the stables of Elorm Foli’s company, E K Brand Consult, called the Sydehassle – which was created from their need to reach more clients quickly within the shortest possible time.

The brain behind this IT-revolutionary idea is a nerd at heart, blessed with a wife who understands the importance of allowing him to isolate himself whenever important milestones have to be reached. We caught up with the usually reclusive entrepreneur to find out more about his latest app.

Welcoming us to the apartment he shares with his wife in the quiet neighborhood of Cantonments, Accra, we were struck by the jovial enthusiasm with which he discussed ideas which belied the unassuming nature we first encountered.

Elorm was fortunate enough to be raised in a typical middle-classed Ghanaian household where the values of hard work, education, integrity and respect were ingrained in him by his parents. His father was an airline pilot for Ghana Airways and naturally was his role model growing up.

“I remember days when my mother would ask my sisters and I to keep the noise down whilst playing because my father had a flight later that night. As a child, that struck me as so disciplined and I always wanted to be like him.” He told us. His mother (a people’s person), was a housewife until she decided to learn how to make clothes so she could have a little business for fun.

Education was everything to his parents, thus, Elorm’s father never wasted money on luxuries but would spare no expense when it came to education. This led to him attending Ridge Church School in Accra and then SOS-HGIC in Tema before leaving for Harvey Mudd College, in Claremont California on a scholarship.

Although his company, E K Brand Consult is just two years old, the idea of starting his company has been over 15 years in the making. “After the collapse of Ghana Airways, our world changed. It was then that I started paying attention to business management and how that affected the lives of thousands of people who depended on the national airline for their livelihood.

Fortunately for us, my father was able to find a job shortly after but I know there were families that never recovered from that collapse. My heart goes out to all the families affected by the banking crisis over the last year.

In many ways, the management teams in these companies let down hardworking, disciplined people who trusted them with their future. When this happened to my family, I appreciated my mother’s entrepreneurial spirit. At a time like that, the last thing you want to feel is helpless. But having a small business allowed the family to have some revenue coming in to take care of little expenses,” he said.

“That strengthened my belief that each family unit should have some income generated from self-employment where possible. This simple idea was the inspiration for E K Brand Consult, our tech-based branding and marketing company designed to help SMEs achieve sustainable growth,” he added.

In a country where most employment comes from entrepreneurs, ensuring stability in this sector will do wonders for both citizens and the economy. We have been fortunate enough to work with some notable companies in Accra and Nigeria and continue to be humbled by him and his staffs’ contribution to their successes.

Elorm described his team’s experience working with these businesses as what has culminated in the creation of www.sydehassle.com – their flagship app which they just finished testing in Accra to some great reviews. We wanted to know if he has ever thought of losing this idea through naysayers?

He was quick to respond that, “Earlier on in our journey, we used to worry about these things but to be honest, we have devoted so much time in developing this idea that it is no longer a major concern. There are a plethora of other ideas that our still in our backlog. We believe success comes from the implementation of these ideas and we have built a team that is qualified to do exactly that.”

See Also:  SIGA law gets tough on board members

Sydehassle came about from their need to reach more clients efficiently whilst creating sources of income for other citizens. Since they made a commitment to cater to SMEs, they knew they would have small profit margins in their business model.

They realized that their best business leads came from referrals and had the idea to build a platform to simplify the referral process for their current clients whilst sharing commissions with them for their very valuable referrals – simply put, the main idea of the app is to empower any of our users to generate extra income through their circle of influence.

How it is put into use? You might know an entrepreneur looking for a world class affordable website for their business and by referring them to us using one’s free account at Sydehassle, you qualify them for a great discount and one earn a commission of GH¢100 if they decide to use the services.

They are also really big on sharing. Each of their users has a unique code which they can share with their friends to tell them about Sydehassle and get them to sign up. When they do this, they will make GH¢10 each time one of these friends earns GH¢100 using the platform.

In case you want to ask, “What happens to those who don’t have large numbers, how do they partake in this ‘blessing’?” Elorm had this to say, “This is open to everybody in Ghana for now. Some people can share it with 100 people, others with 10,000 or even 100 000. The point is, there is no limit to how much anybody can earn on the platform if they are willing to put in work.”

Nigeria’s Buhari to run in 2019 elections

Dealing with emotions at the office