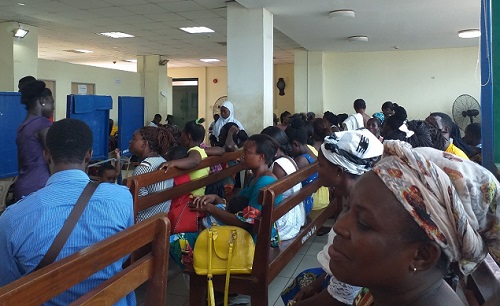 Getting to the Dansoman office of the National Health Insurance Scheme at around 10:20a.m. last week Tuesday, the number of people sitting outside the office was enough to discourage one from entering.

A man at the door of the entrance had to turn people back, urging them to come the previous day before 6:00 a.m. if they want to get their registration through, as the number of people in the office won’t make it possible to get it done, even if they are allowed entry.

Such has been the case with many registering centres of the National Health Insurance Scheme (NHIS), especially in the capital city, Accra.

Very much aware of this problem, the National Health Insurance Authority (NHIA) in December 2018 launched a mobile renewal service that will allow existing subscribers of the scheme to renew their registration using their mobile phones by simply dialling a short code.

However, it seems publicity on it has not yet caught up with members of the scheme, as existing subscribers could be seen going to the registration centres for their insurance renewal.

Thus, the Deputy Director of Corporate Affairs, NHIA, Oswald Essuah-Mensah, has urged members of the scheme to take note of and utilise the service to reduce the pressure at their offices.

“What we have put in place is mobile renewal. We realised that about 70 percent of our members who go to our district offices usually go there for renewals. So, it stands to reason that once you are able to solve any problems regarding renewals, then certainly you are going to see all these queues and frustrations go down,” he told the B&FT in an interview.

He further stated that the authority is in talks with the National Identification Authority to synchronise their system, as the needed data required to register for the insurance scheme would already exist on the Ghana card, thereby expediting the registration process.

“We are also collaborating with the National Identification Authority, so that when we have a significant number of people who have the Ghana Card, we can have people join the NHIS membership through the Ghana Card. The bottom line is that we need to get a bio data of members, and so if NIA is capturing bio data of the public, then it should be easier for us to synchronise our systems so members do not have to go to the district offices to register,” he said.

Despite the systems put in place to reduce the numbers at registration offices, one key challenge that continues to frustrate both subscribers and employees of the NHIA is poor network connectivity.

One of the registration attendants, who pleaded anonymity because he is not allowed to speak to the media, lamented that the poor network significantly slows their work; as the registration process which takes less than three minutes to complete—with a normal network— can take more than 30 minutes with poor network in place.

Some of the new subscribers expressed their frustrations to the B&FT when reached for comments.

“I heard the queue here is always terrible, so I have to be here early if I want to get my registration done. Because of that I made sure I got here at 4:30 a.m. to wait for the office to be opened. But here I am and I still have not got my registration done,” a haggard looking woman, probably in her late 40s, who had been in the office for more than five hours told the B&FT.

Another woman, who would also like her identity to remain anonymous, said she had previously been to the registration centre in Accra Central the previous day and got scared of the ‘crowd’ she saw, and so she was advised by someone to go to the Dansoman registration centre. However, the situation wasn’t any different when she arrived at Dansoman.

For them, it is unthinkable to spend a whole day or more to register for the NHIS, and authorities must put in place robust, infrastructure to address the situation.

A section of the media at the Dansoman district NHIS office

A brief intro to customer loyalty