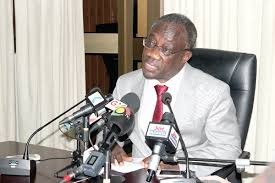 The Ghana Revenue Authority (GRA) has called on businessmen and women to regularly file their tax returns.

Speaking at a roundtable discussion with the Ghana Electrical Dealers Association in Accra, the Commissioner General of the Ghana Revenue Authority Mr. Emmanuel Kofi Nti said: “It is time we improved on our tax system and made it work.

He bemoaned the lack of issuing VAT during trade transactions, and stated that government has given a lot of concessions for traders to help with the issuance of VAT.

“Some time ago, our interaction with traders in Okaishie, Makola and Opera Square reflected that the standard rate wasn’t good and we should do a flat rate system. Now, it is disheartening to learn that despite having applied this the vat rate is still not being used,” he added.

Addressing the issue of smuggling, the Commissioner General also stated that that it will not spare any importer who smuggles goods into the country to avoid paying the required taxes on products.

He said government has revised its benchmark values on imports to help reduce smuggling, so there will be no excuse for anyone caught in the act.

“We reduced the rate to make sure that we are more competitive and to make it difficult for smugglers to continue their trade. Going forward, we are going to implement the law to the fullest,” he warned.

He also stated that as part of its measures, the GRA will increase checkpoints at the borders from four to six to check smuggling, and advised importers to use the approved routes.

Mr. Kofi-Nti explained that because of the high charges at Ghana’s ports, most importers preferred to use the Togo port – which led to the Togo port recording a growth of 300 percent while Ghana’s grew by 4.9 percent last year.

He said it is worrying that some Ghanaian importers use the Togo port and smuggle their goods into the country.

He implored the traders to reduce their prices, so as to reflect the drop in cost of clearing goods at the ports.

“The consumer must see evidence of reduction in the prices at which they buy their goods following the reduction of duties at the ports,” he added.

Market bugaboo … the economics of coronavirus