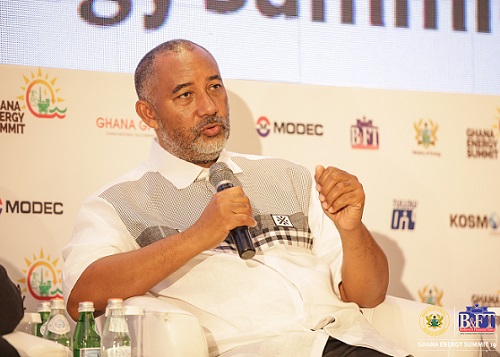 A financial and energy expert has sounded caution to government on the lack of transparency in all agreements backing the contract it signed with Helios/China Harbour Engineering and Ghana National Petroleum Corporation, as well as the Rosneft LNG regasification project agreement.

Alex Mould, former CEO of GNPC, has expressed concern over the seeming lack of proper world-class advisors on technical, commercial and legal areas for all the LNG regasification project agreements signed a year ago on behalf of government, given the short negotiation period which suggests a need for them to be rushed.

Helios and China Harbour Engineering and GNPC are constructing a terminal for the regasification project, which is to be managed by Tema LNG Terminal Company. It should also be remembered that GNPC, last year June, signed a new gas sale and purchase agreement (GSA) deal with Rosneft for the same natural gas supply it had signed with Gazprom in September, 2017. This raised a lot of questions from energy experts then, as to what necessitated abrogation of the Gazprom contract – and the cost associated with the abrogation of that contract.

“It has been a year now, yet stakeholders including Parliament and civil society are not getting much information about the LNG regasification project from government, neither through the Ministry of Energy nor from GNPC. There are more standing questions begging for answers,” Mr. Mould told the media in an interview at the LNG Western Africa Conference 2019 held last week in Accra.

“But it’s very interesting that a transaction of this magnitude and difficulty would be signed within 3 months. It’s something that we need to look at. We need to make sure that all the ‘I’s are dotted and the ‘T’s are crossed. It involves bringing in the right consultants to ensure that the right feasibility is done before any decision is made.

“It also requires understand of what security structure is behind the transaction, and what commitment Ghana has made to the project. So, time will tell.”

It is understood that the ministry off-take is around 250mmscfd through GNPC to all the power plants in Tema power enclave.

Although it is generally considered that GNPC is not directly involved in terminal issues, it is believed that GNPC has signed an agreement with the Terminal Company to guide eventual takeover of the Terminal (being a BOOT) arrangement; however, the details are blurry and it is unclear who the EPC contractors are – aside from the fact that the GSA is between Rosneft and GNPC.

Project completion is expected in the second half of 2020; however, based on a study of projections for gas demand and supply, it is estimated that there is a surplus of gas supply until about 2028.

GNPC is still the national gas aggregator as appointed by government, but it is suggested that the new Gas bill that is going for Approval in Parliament is proposing Ghana Gas (GNGC) as the aggregator.

The Model Electronic Transaction Law …A guide for our growing digital...

“We have brought stability to the power sector” – President...