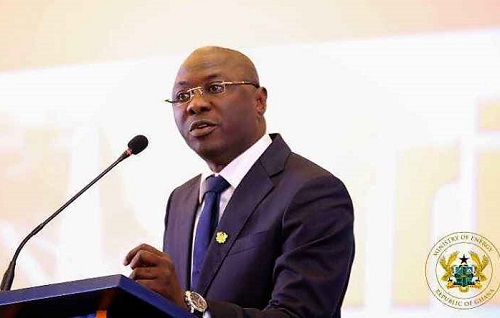 A Deputy Minister of Energy, Dr. Mohammed Amin Adam, has justified the need for government to settle on the GNPC, AGM Petroleum Ghana deal, maintaining that it will help the country increase its oil reserves since the Jubilee Fields is entering its declining stage in the next few years.

According to Dr. Amin Adam “The Jubilee Fields in the next three years will enter into its declining stage which means that if we don’t take care over the next six to ten years, we will not have oil in that fields. Therefore, it is imperative that we increase our reserve size; we increase our replacement ratio; and therefore bring new wells into production.

We can only achieve this if we are doing drilling. We can achieve this if we have companies that are bringing in money and … This is exactly what AGM is doing so that we can increase our reserve provision and ensure that we do not deny the many Ghanaians who are looking for jobs and opportunities including sub-contracts in the oil and gas industry in our country.He ”

His comments follows parliament’s ratification of the Petroleum Agreement between the Government of the Republic of Ghana, the Ghana National Petroleum Corporation (GNPC), GNPC Explorco and AGM Petroleum in respect of South Deepwater Tano Cape Three Points oil field.

It came amidst controversy surrounding the renegotiated deal.

Representatives of the opposition National Democratic Congress (NDC) in Parliament had strongly objected to the amendments made in the Petroleum Agreement which was passed by the previous government under the leadership of John Dramani Mahama.

At a press conference earlier on Friday, the Minority Leader, Haruna Iddrisu, disclosed that 5% of the new agreement covering South Deepwater Tano contract area has been given to an unknown local company, Quad Petroleum, which interestingly, was registered on April 10, 2019.

Further to that, the stake of the country in the original agreement has now been slashed down by 25% (from 43% to 18%) in favour of Aker Energy and to the detriment of the Republic of Ghana.

In the view of the NDC MPs, the renegotiated petroleum agreement will not inure to the benefit of Ghanaians and therefore called for its immediate withdrawal.

They accused the Akufo-Addo-led government of ceding Ghana’s petroleum interest to a foreign company.

“Instead of protecting the public purse and ensure that the citizenry benefits from the country’s petroleum resources, the current government has demonstrated beyond reasonable doubt that it is more concerned in protecting foreign interest to the detriment of the collective national interest”, Haruna Iddrisu surrounded by a good number of his colleague NDC MPs told the press conference.

He added “…rather than improving or maintaining the original agreement executed between the Government of Ghana (GNPC), GNPC Explorco on one side, Akufo-Addo Government has shamefully reduced Ghana’s stake from 43% to a paltry 18%, representing a reduction of 58%. The impact of the “selloff” from AGM/Aker Energy is huge; a potential loss of over 250 million barrels of recoverable oil production equivalent which is almost the size of the entire Jubilee Field”.

To the Minority Caucus, the renegotiated deal is a complete rip-off, especially, as the GNPC has already invested over US$30million in acquiring data and reducing exploration risks over the Block, thus making it attractive prior to the entry of AGM/Aker Energy into same Block.

Ghana’s stake in the South Deepwater Tano Contract Area as per the dictates of the original petroleum agreement stood at:

The existing Petroleum Agreement gives Ghana potential 43% stake; made up of Carried and Participating Equity Interests of 25% and a Commercial Interest of 24% of the remaining 75%.

However, per the renegotiated agreement presented to Parliament for ratification, Ghana’s interest was as follows:

However, following some behind the scenes talks between the leadership of Parliament (both Majority and Minority Leaders), the Minister of Finance and that of the Minister of Energy, GNPC’s additional interest in the renegotiated petroleum agreement was moved from 3% to 10% as captured in the amended report of the Mines and Energy Committee.

Despite the changes made to the renegotiated deal, the Minority Members, especially, those on the Mines and Energy Committee, insisted the deal was not in the interest of Ghana.

The Ranking Member of the Committee, Adam Mutawakilu told the House that “Mr. Speaker, we disagree with this agreement. Article 20 that request for materiality to request for renegotiation is not sufficient in this matter. If somebody has acquired Hess Block and now wants to do exploration on AGM to create an integration that not amount to sufficient condition for its negotiation. And that is why in June 2018, when Hon. Boakye Agyarko was in office as the Minister for Energy, he used it to reject any attempt for any renegotiation”.

But a deputy Minister of Energy, Mohammed Amin Anta, who accompanied his boss, John Peter Amewu to Parliament, explained that “… working in deep offshore block involves so much money. As we speak today, about 13 oil blocks that were awarded between 2013 and 2016.

These blocks were owned by contractors expected to drill 14 wells. They were supposed to spend US$890million. Mr. Speaker, these blocks include the AGM block and as I speak, not a single well has been drilled. Of the US$890million they were to spend on seismic activities, only US$95million has been spent so far. This means that the companies were not able to attract investment – they were not able to raise the funds to do the work that they were supposed to do under the contract. If we have to provide incentives for a company that is ready to bring the investment, and as I speak to you, AGM is ready to start drilling next week.

That is the determination of a serious company to partner with us to increase our reserves and increase production in Ghana. Mr. Speaker, as I speak, government is faced with the challenge of declining oil production.”

The whole issue about the oil and gas industry is to produce oil – that is where we can create jobs; that is where we can get revenue to finance development projects in Ghana and that if Ghana has high percentages in oil blocks and yet those blocks cannot develop into production, and reckons that is not what should be encouraged. It is also important to talk about local content, he noted.

Furthermore, he indicated that people were of the view that the company that is local on the block has 2.5%., insisting that is not correct. It has 2.5% in the parent company, AGM Gibraltar.  “If you put it in the context of the block, it amounts to 1.6%. So, it is not 2.5% as people are saying. But we have been able to renegotiate from 1.6% to 5%.”

After a tense debate on the matter, the renegotiated petroleum agreement was approved by a majority vote.