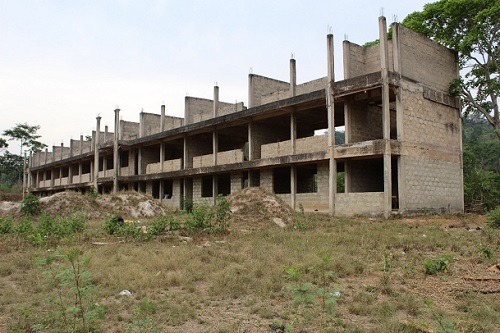 A number of uncompleted school projects in the Sefwi Wiaswo Municipality of the Western North Region has forced school authorities to accommodate students in structures meant as classrooms, as student population grows due to the Free Senior High School (FSHS) programme.

The uncompleted structures, some of which have been delayed for over five years, according to some school officials, is as a result of lack of funding from the government for the completion of the projects.

School authorities at Sefwi Wiawso Senior High School, for instance, disclosed that apart from their uncompleted projects, almost all the school structures which were constructed in the 1960’s have since not seen any major renovation.

At the moment, a 6-unit classroom block funded from the Annual Budget Funding Amount (ABFA), at a cost of GH₵27,738.85, meant to aid teaching and learning activities is now being used to house teachers.

The school authorities, as at the time of the visit by some members of the Public Interest and Accountability Committee (PIAC), as part of ‘2019 District Engagement and Project Inspection,’ further noted that the delay in the release of funds and untimely supply of food items forces the school to buy some food items on credit.

In some instances, they said, monies collected from the fee-paying final year students is used to buy food items to feed FSHS beneficiaries.

However, they fear that upon completion of the fee-paying final year students in May 2019, teaching and learning activities are likely to be disrupted if funds are not released on time to run the programme.

Despite the increase in the student population, due to the FSHS, the single- and double-track system, and the ‘no-cut off point’ for the selection of students for the various programmes, they observed, has affected the academic performance of the school.

At the inspection of a 6-unit classroom block, financed by the Ghana National Petroleum Corporation (GNPC) Foundation at a cost of GH₵213,468.15, at the Sefwi Wiawso Senior High Technical School, it also emerged that the school faces some accommodation challenges.

With a growing student population of about 1,800, the school authorities have had to house students in structures meant as classrooms, due to lack of dormitory facilities.

Similarly, a number of projects remain unfinished. A 12-unit classroom block began in 2014 has stalled due to lack of funds.

Another dormitory facility, which has been roofed and painted, and said to be financed by the GetFund is also yet to be completed and handed over to the school.

The school authorities noted that despite some efforts to get some benevolent institutions to come to their aid they have not been successful except for the GNPC Foundation which responded to their appeal.

The Vice Chairman of PIAC, Dr. Thomas K. Stephens, said he was impressed with the progress of work of the oil funded project at the schools.

But he bemoaned the inability of the state to complete a number of other funded projects across the selected schools visited, in the Sefwi Wiawso Municipality.

Prior to the visit to the Municipality, the PIAC team also inspected other oil funded projects including the construction of lecture halls and offices at the Bibiani College of Health Sciences, and the construction of an ultra-modern science laboratory at Bibiani Senior High School.

Both projects are being financed by the GNPC Foundation at a total cost of about GH₵2,117,563.

BoG must heed Prez’s call and purge itself – Oscar Yao...

Aspiring entrepreneurs urged to be daring