The Chirano Gold Mines Limited (CGML), a subsidiary of Kinross Gold Corporation, won two major awards for its role in environmental preservation at the 2019 Health Environment, Safety and Security (HESS) awards, in Accra.

The mining giant was awarded the “Best Company in Environmental Protection Campaign” and “Best Company Onsite Safety Awareness and Communication.”

The awards, according to the company, represents yet another recognition of their dedication towards upholding the ‘Kinross value’ of Putting People First.

The company after receiving the awards stated that “no job is so important, that it cannot be done safely. Our Health and Safety Department together with all other departments work tirelessly to ensure every task is carried out safely at all times, from the surface to underground.”

It  also noted that their dedication extends to the protection of the environment, from our operational areas to our host communities.

“This award represents only a part of the significant contribution Chirano has made towards preserving, protecting and reclaiming the forest eco-system within which we operate.”

The company said its contribution to national development does not only include protecting the people and the environment, but also played a vital role in the socio-economic development of local communities and the country in general.

Since 2011, Kinross Chirano has spent more than US$ 2 billion in the country. The company contributed approximately US$400 million to the national economy through taxes and royalties paid to the government and US$257 million through wages and salaries paid to employees, approximately 98 percent of whom are Ghanaians.

The company has also provided numerous business opportunities to local contractors, with nearly $1.5 billion spent on goods and services with local companies since 2011, and with 73 percent of all procurement at Chirano done in-country in 2017.

In addition to its fiscal and economic contribution to the development of Ghana, Kinross Chirano has also strongly supported programmes in health and education, positively impacting more than 212,000 beneficiaries in communities surrounding the mine in 2017, which are in line with Sustainable development Goals (SDGs) 3,4 and 6.

Since 2011, the company has spent more than $12 million in programs for local communities, including building clinics and schools, providing vital medical equipment to hospitals and health centres, drastically reducing malaria rates around the mine, and funding professional training for more than 400 youth.

The company in 2018 paid a dividend of $13 million to the government of Ghana, after declaring a $130 million profit.

FULL SPEECH: MESSAGE ON THE STATE OF THE NATION BY THE PRESIDENT OF THE REPUBLIC, NANA ADDO DANKWA AKUFO-ADDO 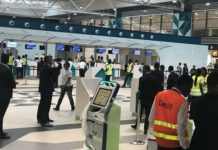