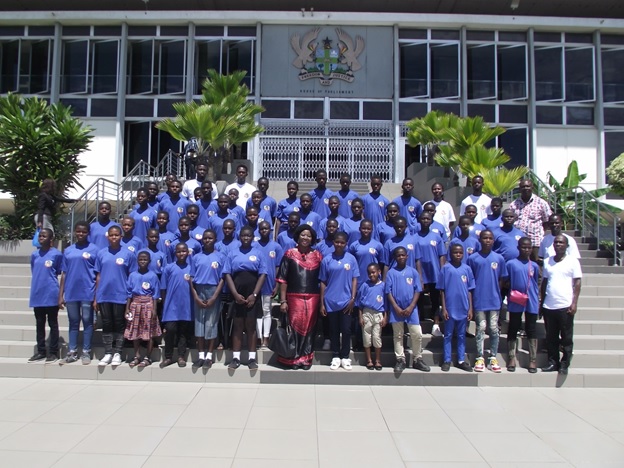 The Member of Parliament (MP) for Hohoe, Dr Bernice Adiku Heloo has challenged students to take their studies seriously in order to become useful in future.

According to her education is the only key to unleash their God given potentials hence the need for them to studious always as future leaders of the country.

The MP urged the students to exhibit traits of humility, respect, obedience and discipline in their quest to become responsible adults capable of managing their own affairs, communities and society at large.

She also encouraged them not to disappoint themselves, their parents and teachers in their academic journey.

Dr Heloo made the call when some selected students from Alavanyo – Wudidi community paid an educational visit to Parliament.

The Hohoe lawmaker who was a former Deputy Minister for Environment, Science Technology and Innovation educated the students on Parliamentary proceedings and answered questions from the students.

She also assured of her readiness to support every effort aimed at enhancing education delivery in the Hohoe constituency.

The students were final year students benefiting from the regular Holiday class organized by the Concern Citizens of Alavanyo wudidi for Junior High students.

Leader of the Wudidi Concern Citizens group. Mr  Kudjoe Amenyah said the regular Holiday Classes for students in the area is a deliberate effort to bring back the educational pride of the community.

He noted that the initiative will ensure that students from the area can also have opportunity to gain admission into some of the top level Senior High Schools and other higher institutions in the country.

Chairman of the Education Committee of the Wudidi Concern Citizens, Anthony Kofitse assured of the committee’s commitment to help deliver the objectives of the group.

He stated giving exposure of the students to the Legislature will help motivate them to aspire for higher heights in future.

The Concern Citizens of Wudidi have for the past three years been holding the holiday for Junior High Student (JHS) in the community.

It has also held motivational talks to both teachers and parents, provides textbooks and conducts examinations at the end of each holiday session.

The group also awards best three students and best female students yearly all geared at promoting education in the area.

Other committees of the Wudidi Concern Citizens include, Fundraising, Infrastructure Development, Business Development and Healthcare.

Creating universities of the 21st Century:… A move towards entrepreneurial academic...

Inspiring Start-ups: I want to be an example for the youth...