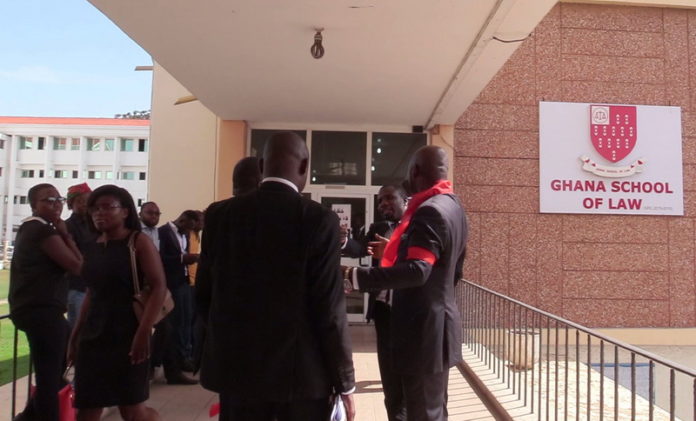 In most academic institutions across the country and beyond, when a student gets a credit (C) in their examination it is perceived to be one of the strongest grades but the reverse is the case in the Ghana School of Law (GSL).

More than 90 percent of the 727 students failed the recent bar exams earlier this year, according to results released by the GLC’s exam committee.

To fail a subject at the GSL means the student had less than 50 percent in the results – meaning if one has 49 percent, which is C, it’s a fail and that student will have to re-sit that particular subject.

The results released by the Independent Examinations Committee of the General Legal Council this year saw only 64 out of the 727 students pass in all the papers.

The 64 students passing their examination means none of them had below B in any of the subjects, thereby making them qualified to be called to the Bar.

It is also part of the regulations at Ghana Law School that if students fail in more than three subjects they will have to re-write all the ten subjects, no matter how well they may have performed in the other six subjects.

However, the cost of the re-sit examination is one of the hurdles that a student has overcome before he or she can re-sit the examinations.  Writing a re-sit costs each student GH¢4,000 – after paying the GH¢13,000 academic fee for the year. This is one of the many issues which have been raised by some of the law students.

Also, for a student to challenge a paper, which is referred to as re-marking, that student will have to pay GH¢3,000 for each paper.

One of the affected students who spoke to the B&FT, on condition of anonymity, said he had to pay GH¢9,000 for remarking three subjects and GH¢4,000 for re-sits.

“Why must getting a C in exams be considered as failed? In every academic institution C is very strong, but the Ghana Law School says C is a fail. We need to do something about this before our legal education becomes threatened,” he said

He said after he paid the GH¢9,000 for re-marking at the bank, the General Legal Council (GLC) later upheld the results. So in this case, he said – since he also ‘failed’ three out of the 10 subjects, per the regulations of the GSL he has to rewrite all the 10 subjects.

“Where do they expect me to get the money to pay for all the 10 subject again? Why should I even pay for the subjects I passed?” he quizzed.

“Every professional institution allows you to re-write only the failed subjects, not to write all the subjects again as we are witnessing at the GSL,” he added.

Meanwhile, some of the affected who share the same sentiment have sued the General Legal Council at the Human Rights Division of the High Court to seek an extension of time to enable them adequately prepare and re-take the exam.

Seven of the about-300 students sued the General Legal Council, the Board of Legal Education, the Ghana School of Law and the Independent Examination Committee – arguing that the about-ten-day period given for students to prepare and rewrite the exam is unreasonably short and an abuse of discretion.

Efficient Management of Agricultural Water is Vital for National Attainment of...