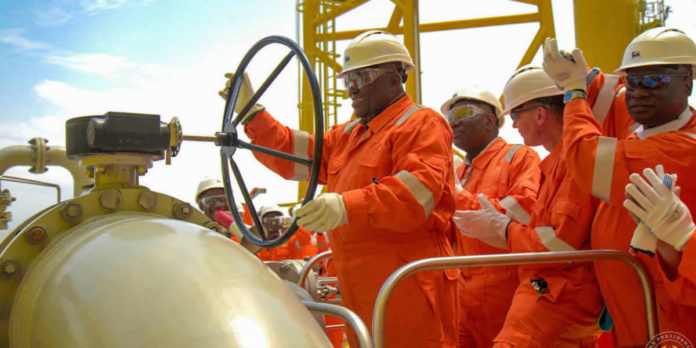 The number of barrels achieved from the three producing fields – Jubilee, TEN and SGN – compared with a 2018 benchmark crude oil output of 51.18 million barrels, and a revised projection of 53.25 million barrels. This also compares favorably with the 2017 output of 58.6 million barrels of crude oil.

This was due to two shutdowns around February to June 2018, by the Jubilee Partners for hot works to be undertaken as part of the Turret Remediation Project. The Jubilee Field remains the highest producing Field among the three.

See Also:  The lost talents …how Ghanaian graduates make a living in China

Having come on stream in May 2017, the SGN Field recorded its first full-year production, nearly doubling output from 5,4 million barrels to 10.7 million barrels between 2017 and 2018 respectively.

The highest monthly production volumes were recorded in January on the TEN and SGN Fields with October yielding the highest volume for the Jubilee Field.
Added to the cumulative production between 2010 and 2017, the 2018 production brings total output to over 315 million barrels.

This is according to the Public Interest and Accountability Committee’s (PIAC) 2018 Annual Report, which was launched in Kumasi.

The Committee disclosed in its report that the gains made in 2018 crude production brought the total petroleum receipts paid into the Petroleum Holding Fund (PHF) in the year under review to over US$977 million.

Additionally, an amount of US$1,606,462.37 was earned as interest on undistributed funds held in the PHF during the year.

PIAC noted that petroleum revenue for 2018 alone could have built almost three times the Terminal 3 of the Kotoka International Airport which is estimated to have costed US350 for its construction.