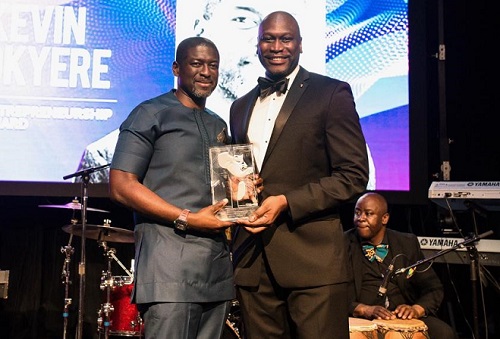 The Chief Executive Officer of the Springfield Group, Mr Kevin Okyere has been honoured with two prestigious Awards.

The first, Entrepreneurship Award, also known as the Impact to Business Award from Face 2 Face Africa, a New York based Pan- African and Technology Company, took place at a ceremony on Saturday July 20th in the United States.

The second, the 2019 RIG AWARD (Man of the Year- Oil and Gas) was presented to him at the Exclusive Men of the Year Africa Awards three weeks earlier in Accra, for contributing towards the development of the upstream sector in Africa and Ghana.

He received a plaque, a trophy and citations on both occasions.

The Face2Face awards is a prestigious celebration of pan-African achievement established to recognize the icons and heroes who have made significant contributions towards the progress, development and transformation of the pan-African Community.

A citation accompanying the Award read: Mr. Okyere, your extraordinary achievements and impact as a business leader have inspired a generation both in Africa and around the globe. You have demonstrated through your exemplary career that vision, commitment and dedication triumph over all.

We wish to celebrate your journey and highlight your momentous impact within the pan-African business community.

Speaking at the forum in New York, Mr Okyere called on successful African business leaders to share their stories on how they managed to overcome challenges in the African terrain in order to inspire the youth and people who have the ambition to become entrepreneurs.

He said he decided to share his experience because there are not many inspiring successful business stories being told to encourage and motivate others to do what they believed in.

“Very often what is projected are Africans who have been successful in entertainment and sports which is good. But it is important to also share the stories of Black people who have been able to build thriving successful companies to inspire the youth across the continent and beyond”.

At the EMY Africa awards, Mr. Okyere said Springfield’s primary aim in business was to make sure that it invests back into communities because it believes that businesses can operate successfully only in thriving and progressing communities.

He invited other business leaders, particularly those in the extractive sector to formulate policies that would ensure the investment of a fair share of their returns in communities to enhance the living standards of the true owners of the natural resources.

See Also:  Maternal Health; should be a concern for all

On both occasions, he thanked the organizers for recognizing what he and his team were doing to improve the living conditions of Ghanaians and people on the continent generally.

How democratic is the euro?