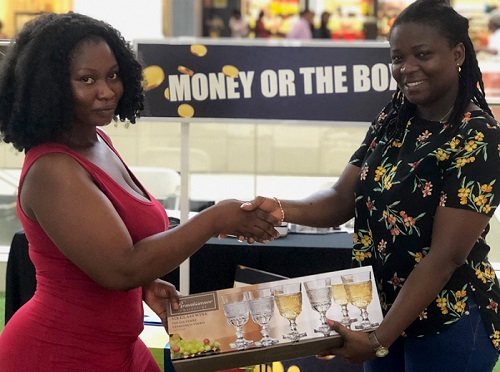 Managers of Achimota Retail Centre’s popular customer loyalty reward campaign, ‘Money or the Box’ say they are baffled by the sharp upsurge in patronage but have promised to sustain the thrill by ensuring that shoppers win more goodies and give-aways.

Launched on January 21, ‘Money or the Box’ has generated high-pitched excitement at the shopping centre and has rewarded scores of shoppers on a weekly basis over the past four months, offering them a chance to make an uneasy and unpredictable choice between a sealed envelope containing money (in the form of shopping vouchers) and a gift box containing unspecified items.

“Our campaign promoters are suddenly overwhelmed with increasing shopper entries for ‘Money or the Box’. Every day of this campaign has been so full of fun, and now we believe that nearly every customer at our centre is looking to have a go on the promo before the curtain rolls down on it in less than four weeks’ time,” Marketing Manager Anthony Asamoah said. The campaign ends on Monday, June 10.

After doing their normal shopping of any value and in any shop at the mall, customers are given a chance to win fantastic give-aways by simply choosing between the unknown contents of a handsome gift box and a sealed envelope containing an unspecified amount of shopping vouchers.

The entries are heaped together every Monday morning and after one of them is picked randomly, the lucky shopper is contacted by phone and invited to a presentation ceremony during which a straight choice has to be made between ‘the money and the box’.

‘Money’ comprises shopping vouchers of multiple denominations totaling up to Ghc 500.00 while the (gift) ‘box’ is loaded with assorted content including some high-value domestic consumables.

According to Mr. Asamoah, it does not matter what the customer may buy or how much he may spend at the mall, stressing that so long as a customer buys something at any of the shops, that customer is entitled to enjoy the thrills and benefits of the promotion.

‘’The excitement peaks at that uneasy moment where you have to decide whether you should pick that tiny-looking envelope or the huge gift box staring at you,” said 21-year-old student, Ms Abbayie, a shopper who, only a couple of weeks ago, opted for the ‘money’ and won vouchers which she spent on clothing.

Many shoppers habitually yield to the temptation of choosing the big box in search of a ready-made gift and have ended up walking away with assorted gift items like brand new cell phones, pressure rice cookers, dispenser sets, stainless steel tools, electric kettles and many more.

“Whether our patrons go for the money or the box, our concern is that there must always be something adequately rewarding for them since the essence of this campaign is to demonstrate our appreciation for their continued loyalty to ARC (Achimota Mall) as their preferred destination for convenient, safe and reliable shopping,” Asamoah said.

Achimota Retail Centre, also known by patrons as ‘Achimota Mall’, is located at Dome, near the St John’s Grammar School on the Accra-Nsawam Highway. Easily the most popular mall in Accra, ARC houses a wide range of Ghanaian and international brands with offerings in different retail categories including, fashion and clothing, electronics, grocery and foods and a range of alluring delicatessen and eateries.

GIPC elected as director of WAIPA board

The overlooked potential of rural spaces and consumers