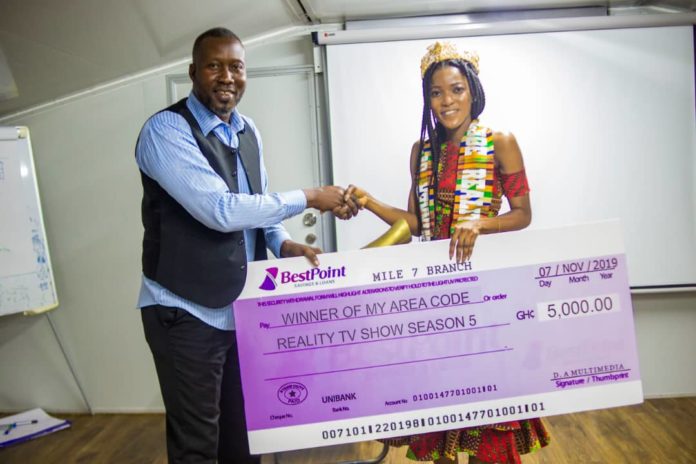 After 13 weeks of Neighborhood supremacy battle among 10 contestants, representing different communities across the country, Selorm Bedzina representing the Dansoman Community in the Greater Accra Region, emerged winner of the 5th edition of the ‘My Area Code’ reality TV show.

In an interview with the Host of the show, Madam Gayobi Achawa Sackey, popularly known as Achawa, she noted that: “Over the years, the show has impacted many communities positively and has embarked on developmental projects such as restocking a library, building a borehole, providing 100 dustbins at vantage points and tree planting projects along the Dansoman roundabout in Accra.”

She said eligible contestants must be 18 years and above and should have lived in the communities they intend to represent for more than 10 years.

Madam Achawa added that: “The reality show is important because it offers contestants the opportunity to bring to bear issues confronting the communities they represent and connect with communal authorities to strategically solve them. We double up to give them the opportunity to develop their talents and learn other talents during the show.”

This year’s winner, Selorm Bedzina from Dansoman, walks away with a sum of GHC5,000, products from Special Ice Mineral water, Super Malt ,Oro insecticide spray and jewelleries from The Boy FASHION Jewellery.

Her winning project ‒ Fixing Drainage Systems in Dansoman ‒ is sponsored by the Knutsford University, Best Point Savings and Loans and the City Escape Hotel.

Taking the place of the first and second runner-ups were Milly of Kasoa and Nii representing Jamestown respectively. Coming in 4th position was Ophelia who represented the North Kaneshie community.

Madam Achawa Sackey congratulated all contestants and winners for the tremendous effort they put into research and findings as well as building network to champion change in their various communities.

How to manage the risks of online businesses