Charles Ofori Antipem, 26, is a man on a mission to practicalise science

On this week’s episode of MTN Heroes of Change 2019, the MTN Foundation highlights the works of Charles Ofori Antipem, a 26-year-old entrepreneur who is on a mission to not just make the subject of science practical and easy to understand but fun as well.

Charles Ofori Antipem, just like every student who goes through the Ghanaian educational system, learns the subject of science from drawings and pictures, if lucky from an ill equipped science laboratory, right from Class One to sometimes the university without much practice. This makes the study of science very boring and uninteresting to many pupils. 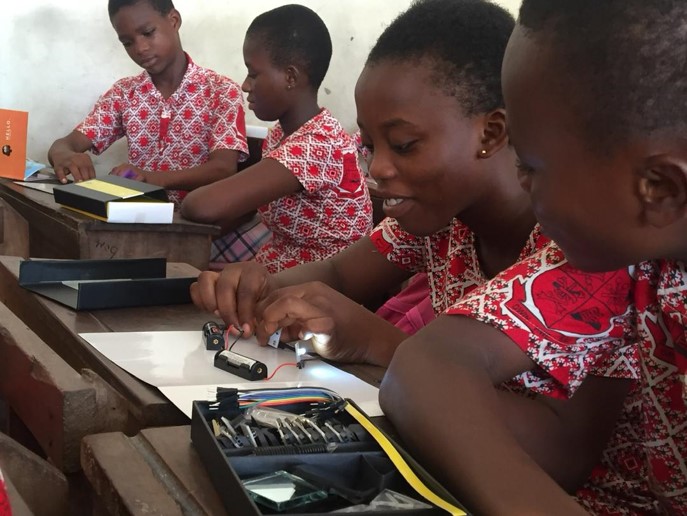 While others move onto other fields and pursue their dreams and not bother much about those behind who will go through a similar ordeal, Charles saw an opportunity to change the story of those behind him and with tenacity and hardwork, he is changing the science story in classrooms one ‘Science Set’ or mobile laboratory at a time.

From his base in Kumasi, the Ashanti regional capital, Charles and his young team have so far impacted 22,000 pupils who have experienced what they are taught and with 9,000 sets sold so far. The project has also seen 550 teachers trained, 370 school reached, 11 people employed, and 10 businesses directly benefitting from this project because everything about the set is manufactured right here in Ghana.

“I used to teach when school was on vacation. This was when I was in university. Whenever I was in class to teach the pupils, I noticed most of them were not interested in science at all. This was because it was taught in abstract.

Everything was shown in drawing or pictures. Science is a practical subject and so when you get the chance to practice what you are taught; one appreciates it better. This is the reason why I started a research on how I could solve this problem,” he notes.

Also known as a mobile laboratory, the Science Set can be compared to a math set that has conductors, capacitors, cells etc. These, he explains, are visible and touchable unlike those days when all you do is here, see pictures, but never get to feel it.

Even though Charles needs to be profitable to sustain operations, he thinks first about the pupils before profit. Hence, instead of selling each Science Set for GH¢150, he has discounted it by almost 50percent to GH¢80 to make it affordable for every child to own one while barely sustaining operations.

The set has transformed the way of teaching and learning in science, increased the interest in the study of science in pupils, has also helped bring out the creativity in pupils who want to be in science and now making the science laboratory accessible to every child.

Even though he is very happy with what he has achieved so far, the lethargic attitude of schools in accepting this new way of teaching and learning with the sets is a major challenge. Also, the Ghanaian educational system favours more theory than practice, which hinders the deployment of these Science Sets in their tens of thousands, which should be the case.

Even though he is facing a hurdle in trying to introduce his innovation into the educational system, Charles hopes to employ more workers under this project and be able to sell and reach about 20,000 pupils this year and each year.

Commenting on David’s project, the Corporate Services Executive of MTN Ghana Mr. Samuel Koranteng said “we initiated the MTN Heroes of Change to identify and reward projects such as the Science Set.”

Charles was nominated for MTN Heroes of Change Season 5 by Caleb Fugah who noted that Charles saw a problem in the education system and was passionate about finding a solution.

“He has been able to come up with a solution and he is doing everything possible for people to understand and accept this science set. I think his love and passion for education is too much, and for this, I nominated him,” he said.

To him, Charles deserves all the help that can come his way because he would want to further reduce the price of the product. “It is always great joy to see his passion when he is training teachers on how to use the science set. He is respected and seen as a hero in our education sector.”

Is Africa going backwards on democracy?