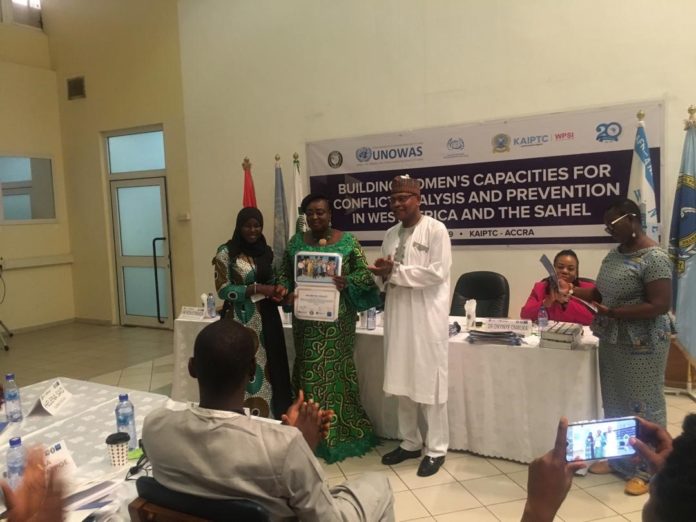 Mohamed Ibn Chambas, the UN Special Representative for West Africa and the Sahel, has emphasised the need to promote women’s leadership and participation in peacemaking and conflict analysis.

Speaking at the closing ceremony of a training of trainer’s workshop at the Kofi Annan International Peacekeeping Training Center (KAIPTC) in Accra, on ‘Building women’s capacities for conflict analysis and conflict prevention in West Africa and the Sahel, Mr. Chambas stated that the role of women is crucial to address the challenges of growing insecurity within the sub-region.

“Today there is a positive momentum in West Africa in terms awareness of the need for promoting women leadership and participation in peacemaking. Without women’s inclusion, peace is not sustainable. We need to redouble our efforts to support capacity-building and skills training for women. UNOWAS is committed to working with ECOWAS to achieve this important objective,” he said.

He called for more capacity-building programmess to empower women and explore more avenues to link women’s peace efforts at the community level with mediation and facilitation efforts at both national and regional levels.

“To maximise the impact of such efforts, ECOWAS and UNOWAS agreed to strengthen linkages between regional, national and local peace initiatives by capitalising on existing institutional structures, including ECOWAS early-warning and special representatives’ offices and the regional Working Group on women; youth, peace and security,” he added.

On her part, Mrs. Onyinye Onwuka, ECOWAS Head of the Political Affairs and International Cooperation Division, stated that the regional Training of Trainers Workshop coincides with the 10th anniversary of the ground-breaking ECOWAS Conflict Prevention Framework (ECPF), of which Women, Peace and Security is one of the fifteen components.

She further noted: “It is crucial to encourage an integrated approach among international, regional and national actors to accentuate women’s capacities for conflict analysis and prevention.

“ECOWAS and UNOWAS remain determined to cement their partnership to empower women peacebuilders in the region, with the support of other partners,” she added.

The workshop forms part of a strong commitment of ECOWAS and UNOWAS to further empower women peacebuilders in West Africa and the Sahel, and was organised by the United Nations Office for West Africa and the Sahel (UNOWAS) and the Economic Community of West African States (ECOWAS) in partnership with the UN System Staff College (UNSSC), the West Africa Network for Peacebuilding (WANEP) and the Kofi Annan International Peacekeeping Training Centre (KAIPTC).

Over 30 participants representing twelve countries in the region were trained in conflict analysis, mediation and gender dimensions of conflict, mainly drawn from the ECOWAS Conflict Prevention Framework and UNOWAS’ Conflict Analysis Handbook.

The Deputy-Commandant of the KAIPTC, Brigadier General Irvine Nii-Ayitey Aryeetey, opened the closing ceremony. Other distinguished guests included: Mrs. Freda Prempeh, Honorable Deputy Minister for Gender, Children and Social Protection; Mr. Pingrenoma Zagre, Ambassador of Burkina Faso to Ghana; Mr. Ron Strikker, Ambassador of the Kingdom of the Netherlands to Ghana, and representatives of the diplomatic missions of Mali and Canada also attended.

During the training, participants were equipped with the skills needed to train women stakeholders in conflict analysis and prevention in their own countries and communities.

Going back to our root-savings 101