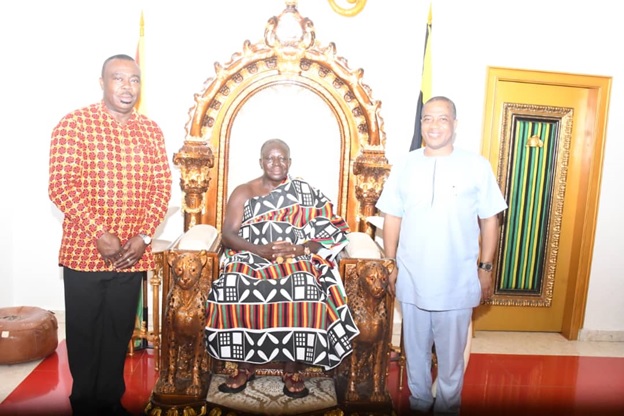 A working Committee made up of representatives of the National Lottery Authority (NLA), State Enterprise Commission (SEC) and the Asante Monarchy has presented a report on the “Otumfuo Lottery Game” to the Asantehene, Otumfuo Osei Tutu II for his approval.

The committee is responsible for the successful implementation of the Otumfuo Lottery Game which would be in a form of scratch cards, number game and raffles.

The committee which was led by Kofi Osei-Ameyaw, NLA Director-General, included Stephen Asamoah, Executive Director of the SEC and Nana Akwasi Prempeh, a representative of the Asante Monarchy.

Also in the meeting to support the committee was Mr. Frank Adjei, a representative of the National Association of Private Lotto Operators and Agents.

A statement signed by the Public Relations Unit of the NLA and copied to the media in Accra at the weekend said, the  Otumfuo Osei Tutu II was impressed about the work done by the committee and commended Osei-Ameyaw for his commitment towards the development of Ghana and Asanteman.

According to the Asantehene, this initiative by the NLA would help contribute meaningfully to the numerous development initiatives championed by the Otumfuo Charity Foundation across the country.

The statement said Mr. Osei-Ameyaw assured the Asantehene that the NLA with the support of SEC, the working committee and other Stakeholders would ensure the successful roll out of the lottery game to the benefit of Asanteman and Ghana.

It said Mr .Asamoah Boateng also indicated that as a supervisory body, the SEC would ensure that such a laudable project by NLA becomes a success.

Data can help to end malnutrition across Africa