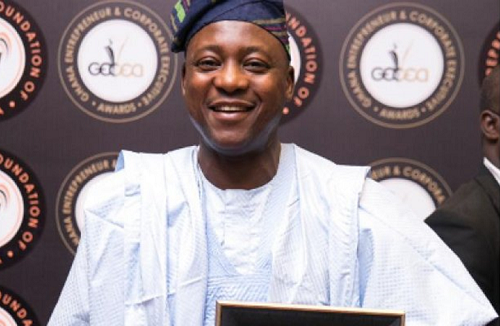 The Managing Director/Chief Executive Officer of First Atlantic Bank, Odun Odunfa, has been adjudged the Outstanding Banking & Finance CEO of the Year 2018, at the 9th Ghana Entrepreneurs and Corporate Executives Awards 2019 held at the Mövenpick Ambassador Hotel in Accra.

The event, which is organised by the Entrepreneurs Foundation of Ghana, honoured other distinguished captains of industry including entrepreneurs, corporate executives and notable individuals who have impacted the Ghanaian economy through business.

Odunfa has over two-and-a-half decades of experience in the banking sector. Prior to heading First Atlantic Bank, he was the CEO/MD of Kedari Capital Limited and served in various capacities on the Board of Directors of First Atlantic Bank.

He has a wide range of experience in Treasury as well as corporate, investment and retail banking, which he garnered during his days with Fountain Trust, Citizens, Ecobank, Capital Bank International and UBA PLC.

Three months after its merger with the erstwhile Energy Commercial Bank into the resultant bank, First Atlantic Bank has been aiming to be among the top-five in Ghana’s competitive commercial banking arena.

The post-merger First Atlantic Bank now has GH¢409million in core stated capital – far more than the GH¢400million capital requirement of the Bank of Ghana.

This has been funded, in part, by a 19% increase in deposits over the 12-month period to end of March 2019 to GH¢1.6 billion, which reflects the confidence its customers have in its financial solidity as well as the sheer customer-focus of all its activities.

By the end of first-quarter 2019, First Atlantic Bank had outstanding loans and advances with its customers to the tune of GH¢546million – up 58% on the size of the loan book one year earlier.

Bigger business volumes are translating into bigger profitability; and, crucially, First Atlantic Bank is throwing its rewards back into its activities, especially the expansion and strengthening of its product and service distribution channels.

The bank’s net interest income grew by 56% to GH¢33million – “The reward for lower cost of funding, which in turn resulted from prudent financial management and rising confidence by an increasingly discerning banking public”.

The public’s appreciation for the “sheer quality” of First Atlantic Bank products and service delivery is highlighted by the 20% increase in the bank’s income from commissions and fees, which rose to GH¢26million for the first quarter of 2019 – up from GH¢21.7million over the corresponding period of 2018.

The bank said the key to its superior service quality lies with its excellent distribution channels, the result of a deep understanding of the customer; and the economic operating environment, backed by heavy investment in delivery channels.

The bank currently runs 65 ATMs and is at the forefront of facilitating e-commerce, too, having deployed 260 point of sales devices so far.

“All this points to a bank that has equipped itself to thrive in the banking industry. Indeed, First Atlantic Bank is moving faster toward its ambition of ranking among the top-five banks in Ghana,” the bank said.

Getting the best out of bank mergers and acquisitions – the...