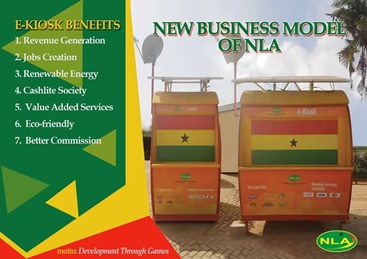 The Asantehene, Otumfuo Osei Tutu II, in collaboration with the National Lottery Authority (NLA) is set to organize the Otumfuo Lottery Game in the form of Raffles and Scratch Cards.

The lottery is to raise funds to support the various socio-economic development initiatives in the Ashanti Kingdom.

A statement signed by the Public Relations Unit of the NLA and copied to the media said, a working committee has been put in place to ensure the successful implementation of the Otumfuo Lottery Game.

It said the working committee together with Otumfuo Osei Tutu II, the board and management of the NLA will officially launch the Otumfuo Lottery Game in Kumasi, indicating the terms, conditions and modalities.

The statement said the expansion of the socio-economic development of Asanteman culminated in the establishment of the Otumfuo Charity Foundation which seeks to improve on the lives of Ghanaians through the implementation of the values, vision and ideas of the Asantehene, Otumfuo Osei Tutu II.

It said the Otumfuo Lottery is aimed at raising substantial funds to support the Otumfuo Charity Foundation to undertake development initiatives in the area of infrastructure, education, quality healthcare delivery and the preservation and promotion of cultural heritage.

According to the statement, Otumfuo Osei Tutu II has also fully embraced the laudable NLA-private sector led solar-powered e-kiosk project which will be implemented across the Ashanti Region hopefully by the end of this year.

It said the solar-powered e-kiosks will create jobs for the people of Asanteman, improve accessibility to internet connectivity, and improved electricity in the Ashanti Kingdom by reducing the pressure on the national grid.

The statement said the NLA is fully committed to contributing its quota to the socio-economic development and sustenance of Ghana.