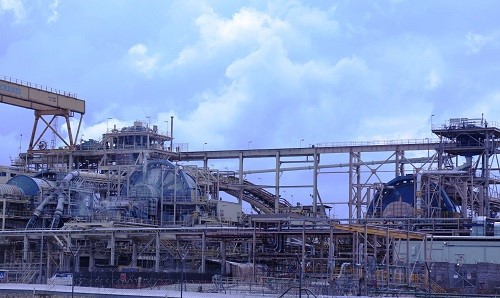 Project on track to achieve commercial production in fourth quarter

Newmont Goldcorp Corporation has announced that the Ahafo Mill Expansion (AME) project successfully processed its first ore and is on track to achieve commercial production in the fourth quarter of 2019.

The mill expansion will increase average annual gold production at the Ahafo mine by between 75,000 and 100,000 ounces for the first five years, beginning in 2020, with mill capacity expanding by more than 50 percent through the addition of a crusher, grinding mill and leach tanks. The project is expected to deliver an internal rate of return of more than 20 percent and, together with other projects at Ahafo, will extend profitable production through at least 2029.

“Combined with Subika Underground, which was successfully completed in November 2018, the mill expansion will increase Ahafo’s production to between 550,000 and 650,000 ounces per year through 2024, while lowering life-of-mine processing costs,” said Tom Palmer, President. “The project also accelerates the efficient processing of stockpiled ore and supports profitable development of Ahafo’s highly prospective underground resources, which continue to demonstrate considerable upside.”

In 2019, Ahafo is expected to achieve record production – with improved costs – driven by higher grades from the Subika open pit, a full year of mining from the Subika Underground and the completion of the Ahafo Mill Expansion. Capital costs for the AME are estimated at between US$140million and US$180million, and have been funded through free cash flow and available cash balances. Commercial production began at Ahafo in 2006, and in 2018 the operation sold 436,000 ounces of gold at all-in sustaining costs of US$864 per ounce.i

Over the last six years, Newmont has successfully built 11 new mines, expansions and projects on four continents – on or ahead of schedule and at or below budget. These projects include Akyem and the Phoenix Copper Leach in 2013; the Turf Vent Shaft in 2015; Merian and Long Canyon in 2016; the Tanami Expansion in 2017; Twin Underground, Northwest Exodus and Subika Underground in 2018; and the Tanami power project in 2019. The company also completed a value-accretive acquisition of Cripple Creek and Victor in 2015, and delivered a profitable expansion at the mine in 2016.

Upon completion of the Newmont Goldcorp transaction earlier this year, the company now holds the largest Reserves and Resources in the gold sector – with 90 percent located in the Americas and Australia. These assets allow the company to sequence profitable projects in its unmatched pipeline to sustain six to seven million ounces of steady gold production over a decades-long time horizon.

Adapting to Coronavirus: The challenge Fashion Schools face and solutions

Youth in cocoa entrepreneurship …TN Delfah and Solidaridad lead the...

Akufo-Addo embarks on one week vacation