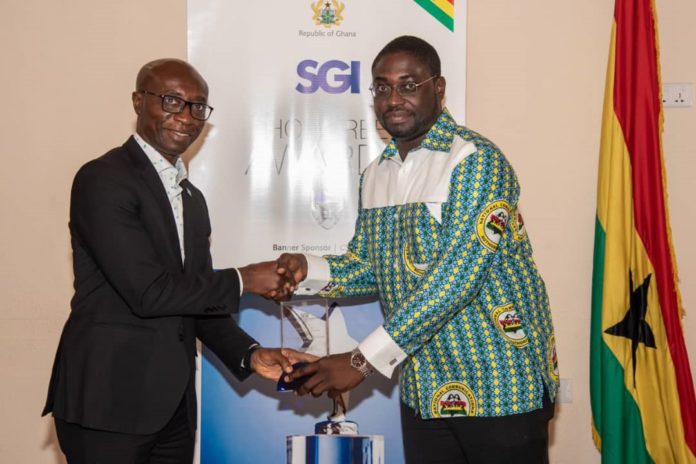 The National Communications Authority (NCA) was honoured as the CERT Capacity Builder of the Year by the Security Governance Initiative (SGI) Awards held on Wednesday 27th November, 2019 at the SGI Secretariat. SGI is a partnership between government and the United States of America aimed at improving the effectiveness of Ghana’s security sector.

Individuals and organisations which made distinctive contributions to cyber, maritime and border security during the year 2019 were honoured by the SGI awards.

Mr. Kwadwo Osafo-Maafo, Head of the Cybersecurity Division/NCA-CERT, received the award on behalf of the NCA. Mr. Osei Bonsu Dickson Esq., Chief Legal Advisor of the National Security Council Secretariat who coordinated the event, congratulated the National Communications Authority and expressed gratitude for the establishment of a CERT for the telecommunications industry and the efforts being put into capacity building to enable timely response to cybersecurity incidents, and geared toward a safer Digital Ghana. Mr. Osei Bonsu urged the NCA to continue contributing its quota in protecting Ghana’s cyberspace, as statistics on cybercrime keep on rising.

NCA-CERT is a sectoral CERT inaugurated by the President Nana Addo Dankwa Akufo-Addo on the 22nd of October 2018, to be responsible for coordinating responses to cybersecurity incidents in the telecommunications sector.

Since its inception, the NCA-CERT among others has developed local human resource. The NCA retained sixteen (16) National Service Persons in 2018 and trained them on cybersecurity. They are currently employed at the NCA-CERT. Also, the CERT has developed its in-house tools and methodology to automate categorisation, analysis and visualisation of cybersecurity incidents.

The NCA-CERT recently became a member of the Africa-CERT and is a one of the pioneers on the African continent with regard to CERTs created for the telecommunications industry.

In 2016, Ghana and the United States signed a Joint Country Action Plan (JCAP) that identified three priority areas of the partnership: Maritime Security, Border Management and Integration, and Cybercrime and Cybersecurity.  In addition, Administration of Justice serves as a cross-cutting theme.

Mr. Kwadwo Osafo-Maafo receiving the award on behalf of NCA at the SGI Awards held on 27th November, 2019

Issued by the National Communications Authority

Only 20% of property owners in Accra pay property tax ...