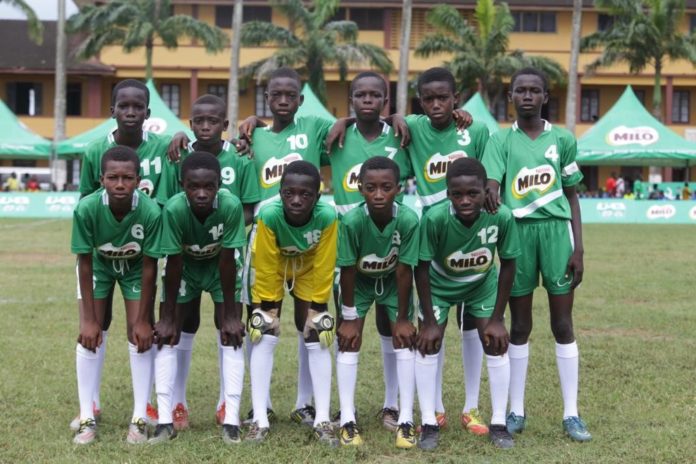 The Milo U-13, Champions League (CL), zonal qualifies continued in zone three last weekend at Cape Coast and it was Myohuang Forces who were crowned as champions for the second successive year running after beating Talent Bridge Academy 2-1 in the final

Unlike the zone one and two finals where the semi finals were seen as the real finals before finals, this final was the actual finals everybody at the ground expected, the highest scoring side; Talent Bridge Academy with 13 goals scored, against the best defensive side Myohuang Forces who until the final match hasn’t conceded in the whole tournament.

It was an exciting moment to see as the euphoria could not be overemphasized. Right from the blow of the start whistle,  both sides entertained the crowd with dazzling skills and brilliant teamwork.

Not withstanding the intensity, it did not take too long for Daniel Affu of Myohuang Forces, the defending champions  to record the first goal of the game.

The goal didn’t force Talent Bridge into panic mode as they kept their shape and played to their well rehearsed formation. Their pressure paid off as they were awarded a penalty on the stroke of half time which was missed by the skipper of the team, Matthew Addae, as he was denied superbly by Forces’ goalkeeper Edmund Kwofie to end the first half with Myohuang Forces leading.

Talent Bridge kept mounting the pressure as they came back from recess until  their pressure paid off when Emmanuel Arthur finally restored parity for his side with a beautiful solo goal.

That didn’t last long as their jubilation was cut short by Kweku Opare of Myohuang, who scored the third and final goal of the final to give his side the lead which happened to be the winner for his side.

Unfortunately, the championship ICON, Stephen Appiah could not make this zone due to his involvement with national assignment as the Black Stars of Ghana were in Dubai preparing ahead of the AFCON.

Former Black Stars striker and a good friend of the Icon, Augustine Ahinful, took over the championship touch to take the kids through the act of defending, dribbling skills coupled with some agility drills and teamwork ably assisted by the technical director for the Ghana Football Association, Oti Akenteng.

Zone 4 of the Milo Under 13 Champions league will come off from Wednesday 12th June to Friday 14th June at Kpando Senior High school in the Volta Region. Zone 4 comprises of 16 schools from, Eastern, Volta, Oti and Greater Accra Regions.

Macroeconomic Bulletin … with Maxwell Ampong – The Most Influential Africans...