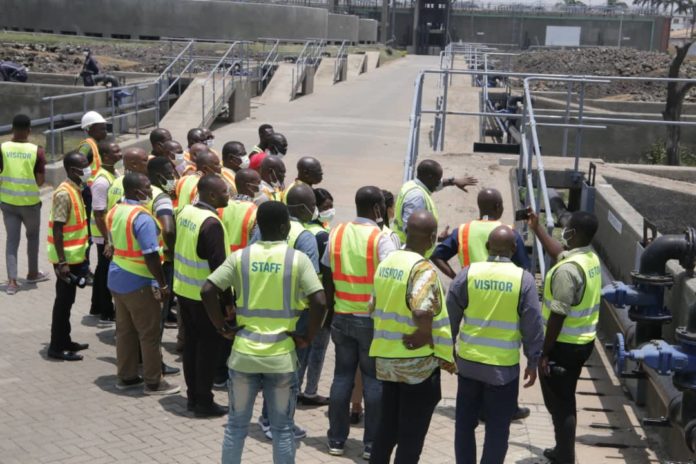 Mr. Yaw Addo Frimpong, Chairman of the Parliamentary Select Committee on Environment, Science, Technology and Innovation – who is also the Member of Parliament for Manso-Adubia in the Ashanti Region, has called on political leaders and all stakeholders to support the Jospong group of companies for its immense investments in the waste management, environmental and sanitation sub-sectors.

He was speaking when a joint select committee made up of Sanitation and Water Resources; Environment, Science and Technology; Local Government; Works and Housing toured major waste management facilities and landfill sites across the country to ascertain their conditions, after the recent intermittent fire outbreaks at the Kpone landfill which have become a public health threat.

As part of the tour, the team visited the Integrated Recycling and Compost Plant (IRECOP) and Sewerages Systems Ghana Limited, which are all subsidiaries of the Jospong Group of Companies.

Mr. Frimpong also proposed a small increment in the Value Added Tax (VAT) to help finance waste management in the country. “I am proposing that if we add some small percentage on the VAT for sanitation, I don’t think any Ghanaian will kick against that idea,” he stated.

The General Manager of IRECOP, Ms. Betty Brown Nyadu – who conducted the MPs through the work flow of the IRECOP technology, indicated that the facility charges very little; which is far below the World Bank’s recommended fee of US$30 for managing a tonne of waste.

“The tipping-fee we charge is so little that it does not cater for our operational cost,” she pointed out. She is however hopeful that government will intervene to make waste management more sustainable and effective.

The Ashanti Regional Minister, Simon Osei Mensah, urged Zoomlion to speed up the process of establishing its’s Integrated Recycling and Compost Plant (IRECOP) in the Ashanti Region, to help manage the overwhelming waste being generated in that region.

The Ashanti Regional Capital, Kumasi – which is the second-largest city in the country, generates a total of 1,500 tonnes of waste daily but does not have a recycling plant to sustainably manage the waste generated.

The only landfill that receives municipal solid waste in the Kumasi metropolis is the Oti Landfill, which is currently full to capacity – posing a health threat to residents as leakage from the waste is heavily polluting water-bodies in the region.

The disposal of liquid waste directly into water-bodies has also become a norm in the region, as cesspit trucks line up to take turns dislodging fecal matter into them. Experts have described the situation in the Ashanti Region as a public health threat waiting to explode.

The Regional Minister made the call during a familiarisation tour by a joint parliamentary select committee on Sanitation, Water Resources; Environment, Science and Technology; Local government; and Works and Housing of the region to ascertain its waste and environmental sanitation conditions. The joint parliamentary select committee inspected the Integrated Recycling and Compost plant and commended Zoomlion Ghana Limited for establishing such a magnificent waste recovery and recycling complex in the region, which will undertake the function of treating both solid and liquid waste.

The waste management and sanitation situation in the Secondi-Takoradi Metropolitan area of the Western Region is also very challenging.

The health-threatening state of the Sofokrom landfill site, which is the only one within the metropolis, was uncovered during a joint parliamentary select committee tour of the region.

A visit to the Sofokrom landfill site sparked anger among the Parliamentarians, who had difficulty accessing the site. The open disposal of fecal matter in the bush coupled with the stench made the Parliamentarian declare the site a ‘disaster zone’ that requires immediate action.

A source at the waste management department of the Sekondi-Takoradi Metropolitan Assembly revealed that the Assembly lacks capacity to manage the landfill site, hence the need to re-engage Waste Landfills Company Limited to help provide proper, engineered landfill management.

The Member of Parliament for Banda and the 1st Deputy Minority Chief Whip, Ahmed Ibrahim, in an interview with journalists condemned sanitation conditions at the landfill site, describing it as a “sanitation disaster waiting to explode”.

He said modern practices in waste management focus on waste recycling, which is sustainable and should be the focus of every assembly to ensure waste is recovered and recycled into useable materials.

“The joint select committee on this tour will recommend the establishment of waste recycling and compost plants across all the regions to help create jobs and resources out of the waste being generated,” he said.

Meanwhile, the Deputy Western Region Minister, Gifty Eugenia Kusi, said waste recycling and composting – as demonstrated by Zoomlion’s Integrated Recycling and Compost Plant (IRECOP) in Accra – should be established in the region to help create value and jobs out of the region’s waste.

She charged the parliamentarians to advocate for an increase in the budget allocated to the region to help tackle sanitation.

Members of the delegations were, however, surprised government is yet to sign an off-taker agreement to start using the IRECOP facility, including the one that was inaugurated by the Vice President Dr. Mahamoud Bawumia’s office in April this year.

Zoomlion is also currently constructing a 10.5 kilometre asphalt road to enable easy access to the recycling facility that is about to be inaugurated.

The delegation’s leader, Nana Amoako – Member of Parliament for Upper Denkyira East, indicated that considering what has happened to Kpone landfill site in Accra recently, there is an urgent need to take immediate and pragmatic actions to provide sustainable solutions to waste management challenges in the country.

He said disaster awaits the country, considering the recent ignition of flames at the Kpone landfill site and current devastating condition of the Oti landfill in the Ashanti Region.

The Quality Assurance Manager of the Kumasi Integrated Recycling and Compost Plant (KCARP), Dr. Glen Kwabena Gyimah, in an interview explained that the facility will provide a multi-purpose function by treating both solid and liquid waste.

He said the facility is made up of various recycling systems which will process a total of 2,500 tonnes of waste per day.

Baptista S. Gebu’s thoughts ….The giving capsules: No one becomes...

DGIF register inmates for NHIS cards under ‘My Health Behind Bars’...