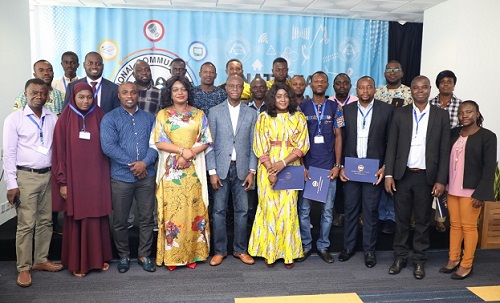 The second Conformance and Interoperability Training programme for sister members of the ITU in the African Region has been successfully organised in Accra. The training was organised by the International Telecommunications Union (ITU) with the support of the National Communications Authority (NCA). Staff of the NCA facilitated the session.

Addressing participants at the end of the training, Director General of the NCA, Joe Anokye, expressed his satisfaction with the interest shown in Ghana’s Type Approval set-up and its laboratories by the ITU and sister regulatory agencies.

“The interest that has resulted in Ghana been used for these trainings goes to add further credence to the work that the Authority has put in over the last few years to enhance our reputation as a leading telecommunications regulator on the continent”, he said.

Mr. Anokye added aside the investment in infrastructure, the NCA has also committed resources in developing the human resource capability of its staff which was evidenced in the successful manner they facilitated the training.

Mr. Anokye also said the NCA has opened its doors to share knowledge with sister regulators. “We keep hosting regulators from across the continent for benchmark visits; we will continue to welcome others and to also make it a point to learn from others”, he said.

The first Conformance and Interoperability Training was held in September 2019 for some English-speaking ITU countries in the African Region. The just concluded training was for non-English speaking countries with some other participants from the NCA.

ITU Representative Madam Chali Tumelo, had earlier in the training said due to the importance of conformance and interoperability testing in the global telecommunication landscape, the ITU supports efforts of member states by implementing capacity building programmes on that subject matter. Ms. Tumelo stated that the African Regions training programmes had always been organised in Tunisia and that Ghana’s foray into Conformance and Interoperability Testing had come at the right time to help the ITU support other member states in this area.