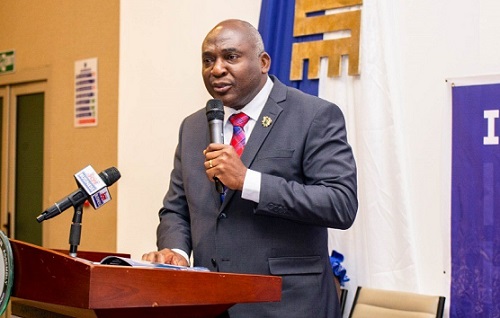 The President of Institute of Directors (IOD), Mr. Rockson Kwesi Dogbegah has said that one of the critical responsibilities of the Board of any organization is to ensure that the organization remunerates fairly, responsibly and transparently so as to promote the achievement of the strategic objectives of the organization and to attract, motivate, reward and retain human capital.

Delivering his speech, the President of the Institute of Directors added that a good Corporate Governance architecture is necessary to streamline the activities of individuals, teams and the entire organization to be efficient and effective in their roles to prevent negative occurences such as corruption, embezzlement, tax evasion, sexual harrassment, victimization, theft and other organizational vices.

To this end, Mr. Dogbegah pointed out to HR Practitioners that “policies developed by the Human Resource through the Board are to guide the behaviours of individual employees as well as the culture of the organization to set the tone for organizational success.”

In his welcome address, the Executive Director of IHRMP, Mr. Ebenezer Agbettor said the year had been very progressive for the Institute because for many years, the Institute had been a tenant paying so much for rent, but as he put it “today, our levels don change, we are a Landlord and already started renting out our facilities of the new HR complex situated at Tseaddo, East La.” Turning his attention to the Institute’s pursuit of its Chartered status, the Executive Director pointed out that significant progress has been made with the HR Bill, which is expected to go through a second reading in Parliament to be passed into an Act to support the Institute promote professional training in human resource management and regulate the practice of human resource management in the country.

A unique feature of this year’s AGM is that, the Institute’s Fellow status was conferred on some members and certain industry players who have distinguished themselves in the HR space in Ghana over the years.

The Institute also used the occasion to outdoor its maiden corporate magazine dubbed “The HR News” at the AGM. A minute silence was observed in honour of one of the Institute’s members, the late Mr. Kwabena Owusu, former Head of HR at the La Palm Beach Hotel, who was buried on 5th October, 2019.

How to protect your profession