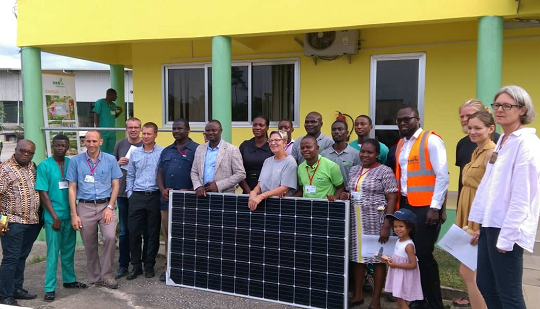 HPW Fresh and Dry Company has launched its fully-installed 360KW solar energy system at its factory in Adeiso, West Akim district of the Eastern Region, to handle 25% of its electricity demands for production.

Due to continuous growth and expansion of the company’s infrastructure, its problems in energy consumption also continue to increase; it is in this regard that the company has embarked on the use of renewable energy solutions to curb the high electricity and diesel consumption in its day to day operations; and also reduce the cost of maintaining generators when they break down.

Speaking at the launch, Maik Blaser, Chief Executive Officer of the Company said: “Prior to the introduction of renewable energy, the company’s consumption – depending on the production it embarked on – consumed between 5 to 15 thousand litres of diesel every week; however, the solar installation is expected to cut down diesel consumption by around 30%.

He added that: “A couple of years back, there was a decision by government to increase tariffs, and that shot the company’s electricity consumption up by 30%; but, gradually, the situation has been stabilised since we introduced the use of renewable energy.

“Before the installation of these solar panels, the company had already constructed a biomass boiler and also a smaller solar installation that were used in production, but for the sake of growth and expansion there was a need to increase it.”

Currently, the biomass covers 100% of the company’s heat demands, and the solar covers about 25% of its electricity demands; and still investments were made in a biogas generator that will also cover another 25% – so, in no time, the company will be 100% on renewable energy for heat production and 50% on electricity. 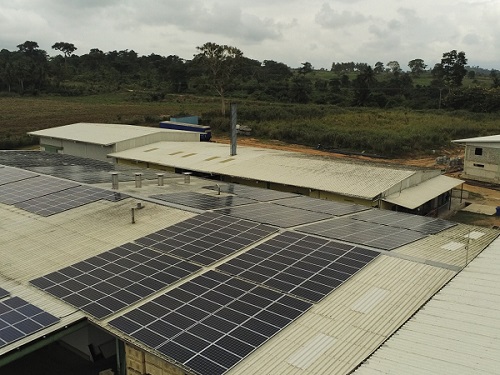 Mr. Blaiser added that: “The challenges we and the community face are mostly infrastructural, and I see that government is putting measures in place to be able to distribute electricity evenly. For example, there is a great extension going on here with the building of high tension voltage poles; so, I see steps have already been taken in that regard. Electricity capacity has been doubled since 2012, and so now distribution has to be extended accordingly.

“Our other challenge here is the road network, and this is what we have been pleading with government to come to our aid with. Because when we have good roads, we will definitely increase our production, employ more people – which will automatically reflect in the taxes we pay as a company.”

The project was undertaken by BeBa Energie Africa, a renewable energy company and one of the pioneers in solar photovoltaics (PV) and wind energy in Germany, and constructed by Tino solutions, a renewable energy EPC and project management company, with a 25-year warranty, and is expected to last for over 40 years at least before some of its power distribution strength will need to be revamped.