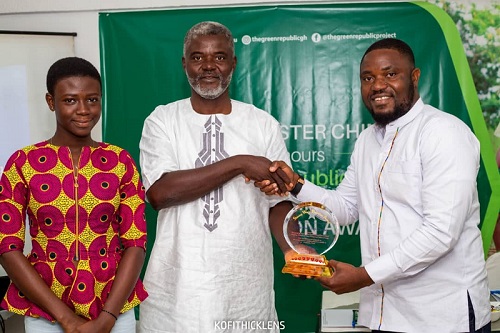 The Convener of the Green Republic Project, Nana Yaw Osei Darkwa, has received recognition from the renowned philanthropic organisation the Supreme Master Ching Hai, for his role in helping protect the environment through his tree-planting efforts.

Mr. Osei Darkwa was given the Shining World Protection award for his leadership and exemplary efforts which have inspired many young people and communities to take part in the fight against climate change and global warming through the planting of trees.

The plaque that accompanies the award read, in part: “In recognition of your outstanding advocacy for environmental conservation by planting millions of trees, mitigating climate change. With compliments and gratitude for your compassion and benevolence commitment to protect our planet”. The award also came with a US$10,000 prize money to be used on funding activities of his NGO.

Commenting on the honour bestowed on him, the Green Republic Convener thanked the philanthropic organisation for recognising his efforts and further praised his team for the hard work they put in, and which have resulted in this award.

See Also:  Survival of the fittest customer experience will be the only game changer for Takoradi hotels

The Green Republic Convener also seized the opportunity to reinforce his call on government to set a National Tree Planting Day, so as to help accelerate the nation’s reforestation drive and, in particular, the battle against climate change which must be won at all costs.

He also thanked the Forestry Commission of Ghana and Humano Energy for their support in the fight.